I called the guys over for another session last night.  Almost everybody that I invited was able to attend, so we had the biggest crew we've had in a long time and, consequently, some of the guys didn't get to spend a lot of time running trains. Still, it was a good night, and the very few problems that we had were very minor

I took many photos during the session, but I used a new (to me) phone camera, and was disappointed to find that many of the photos were too blurry to be used. Here are the best of them:


Peter and Brendan were also present but I somehow managed to get no photos with them. Sorry guys.

Thank-you to the crew-members, who all did an excellent job in operating the layout and keeping to the schedule. Thanks also to my lovely wife and Harvey House manager, Beth, for doing a great job with the catering.

Last night the gang visited Darren's Cann River layout to inspect the work he's been doing to extend the layout. It's been a year since I last visited the Cann River, and I was already impressed by the way that Darren has captured the rolling hills of east Gippsland.

From the moment I walked through the door I was gobsmacked by the vista the layout now presents:

I found this track plan that shows the layout when the planned extensions have been completed.

My job for the night was to run an engine from Wingan (bottom centre on the plan) to Sleep Creek (bottom right) where I collected six wagons loaded with coal, and then delivered them to a paper mill at Chandler (top left hand corner of the plan.)  I have to say that the size of Darren's train room, and the long runs between towns, gave me a real sense of having travelled a long way with my train. Here's a pictorial rendition of that journey.

My engine and guard's van at Wingan. First step was to run around the guard's van. 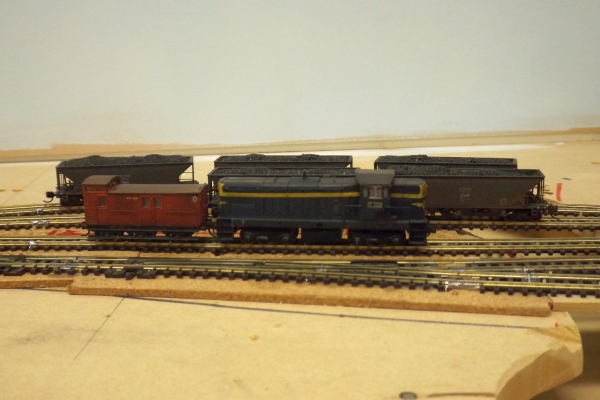 Crossing the tall trestle bridge between Wingan and Sleep Creek. Darren scratch built this bridge working from photographs of a real bridge on the Victorian Railways. 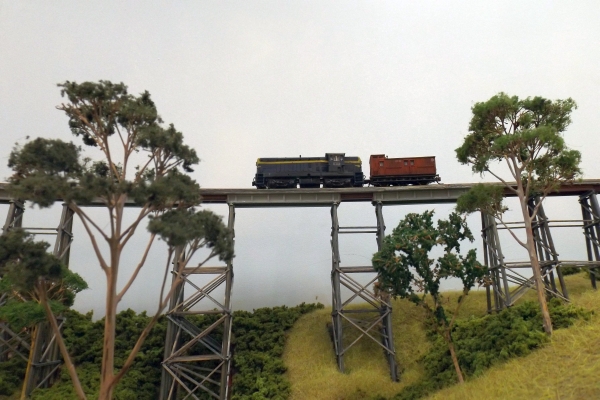 After collecting the loaded wagons at Sleep creek I headed off to Noorinbee where I had to turn the train before continuing on to Chandler.

While I was running into the siding at Noorinbee the gremlins got into Darren's DCC system, and we all lost control of our trains. Here's a shot of Darren and Greg pondering the problem, while Brendan (you can just see his shoes) is trying to sort out the problem.

Losing control of my train at Noorinbee meant that my train continued right through the town, where I was able to get some photos in locations that I would not otherwise have visited: 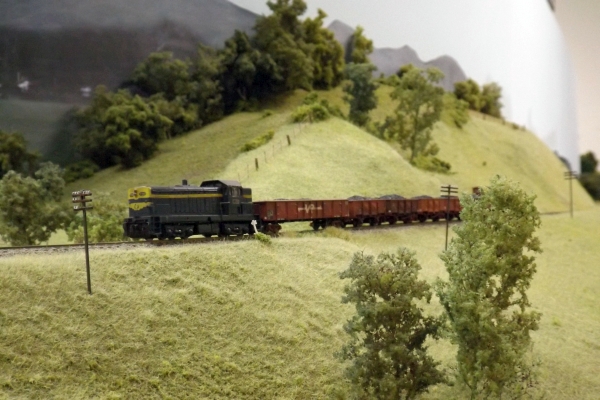 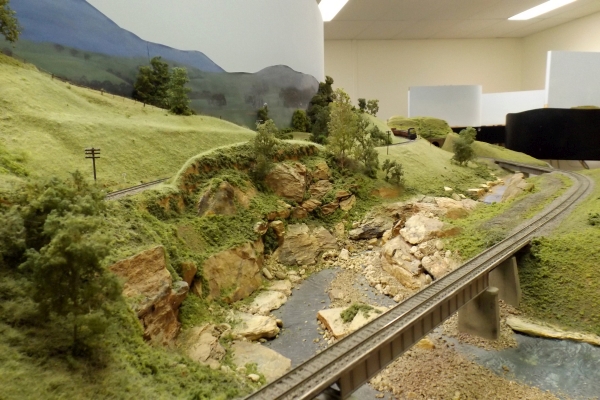 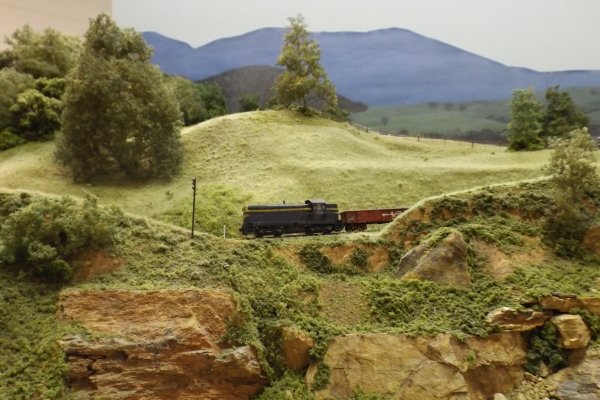 Once the problem was sorted out I returned to Noorinbee where I turned my train and then continued on my way. Here's my train approaching a level crossing just before reaching Weeragua. 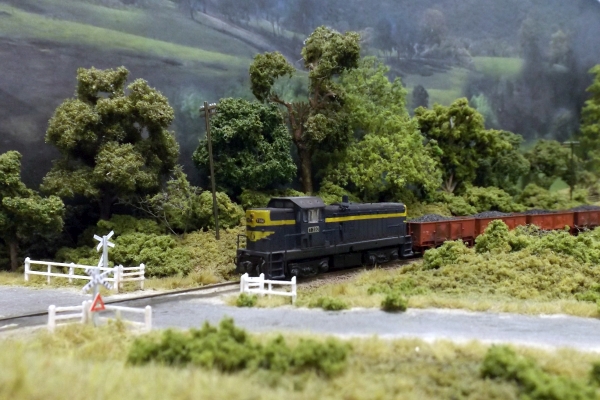 Here's my train at Weeragua. 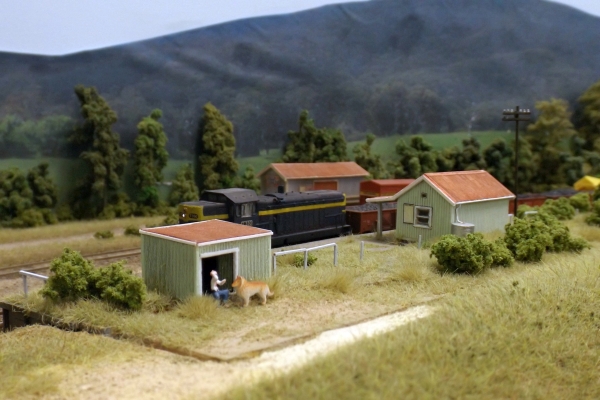 Between Weeragua and Chandler there is another level crossing and three more trestle bridges: 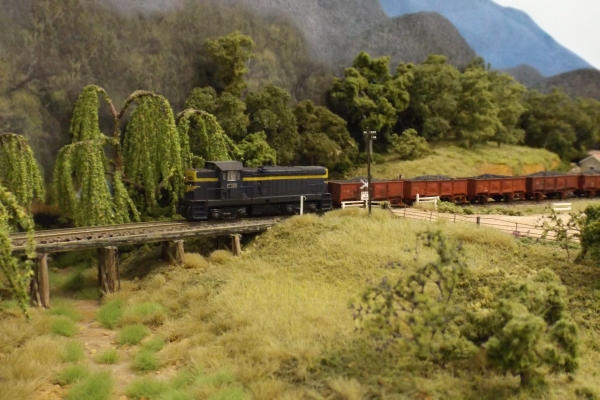 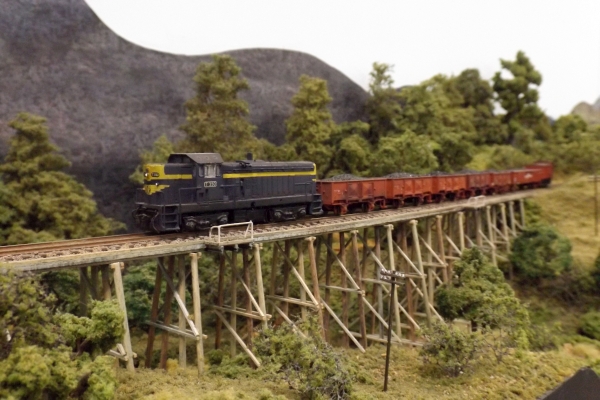 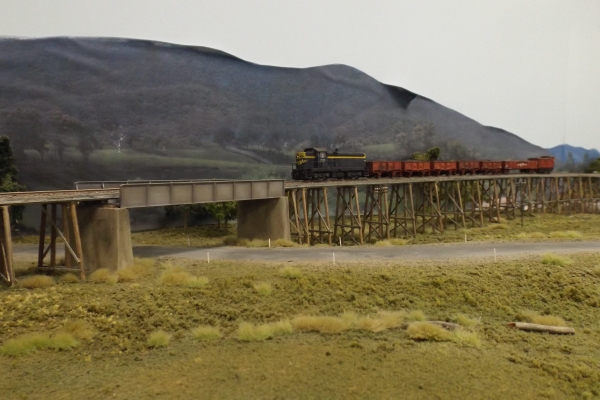 Here's Chandler, where I will be shunting my coal wagons. 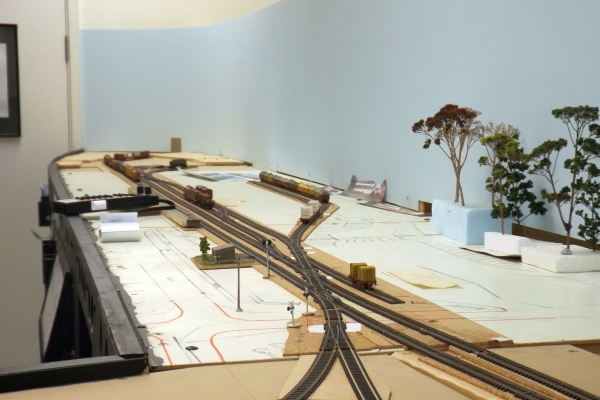 After swapping my loaded wagons for five empties, I started my return trip to Sleep Creek and Wingan. 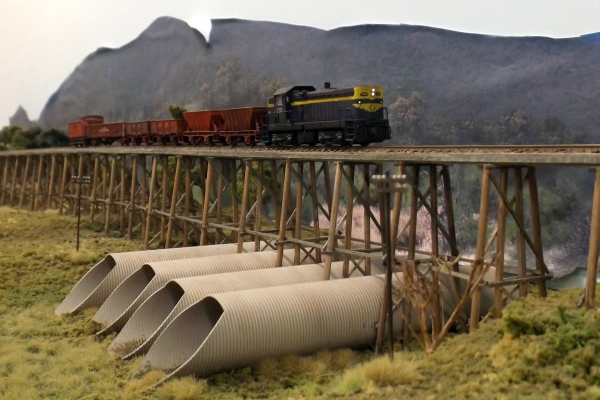 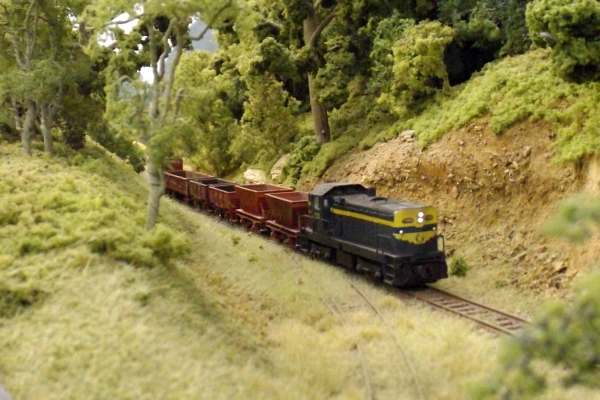 My train approaching Noorinbee, where I will turn it before heading on to Sleep Creek: 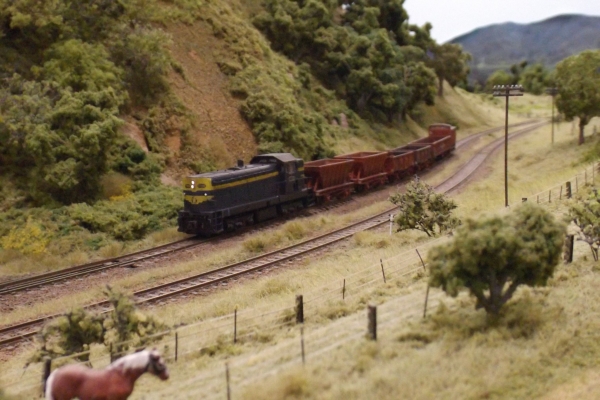 Here are some more photos of the layout room: 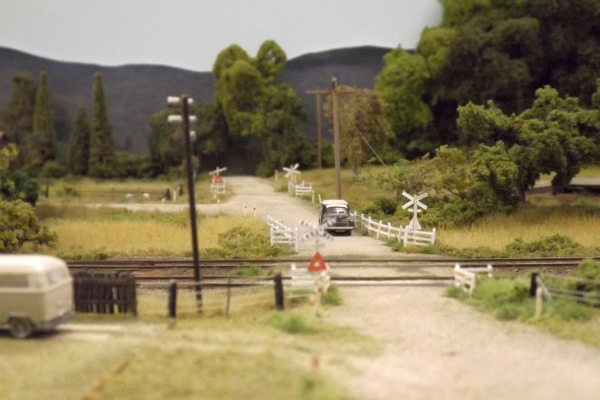 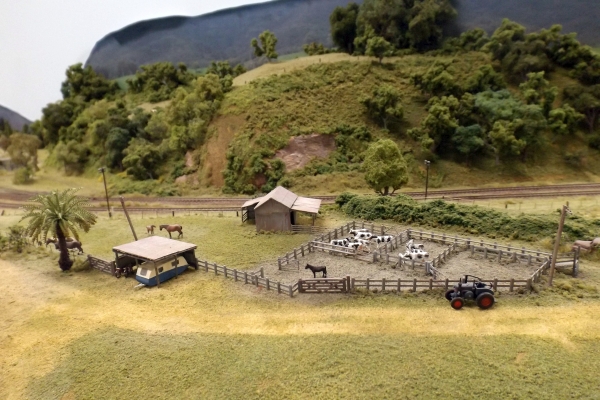 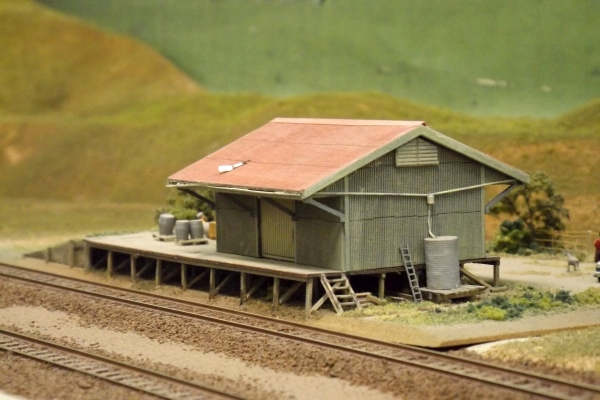 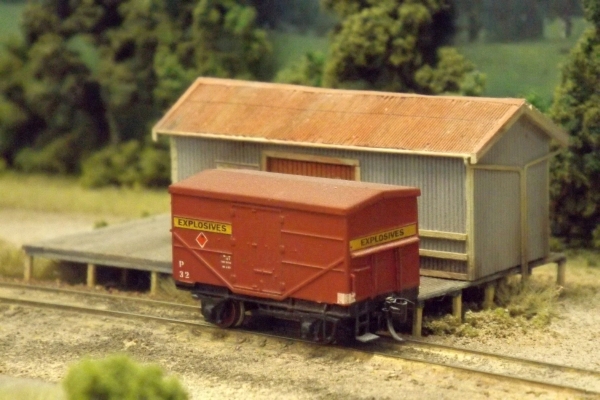 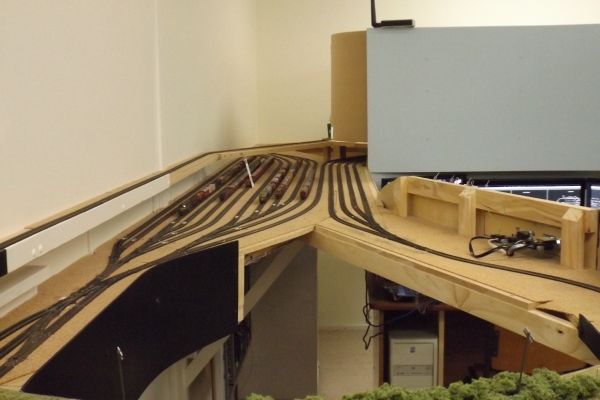 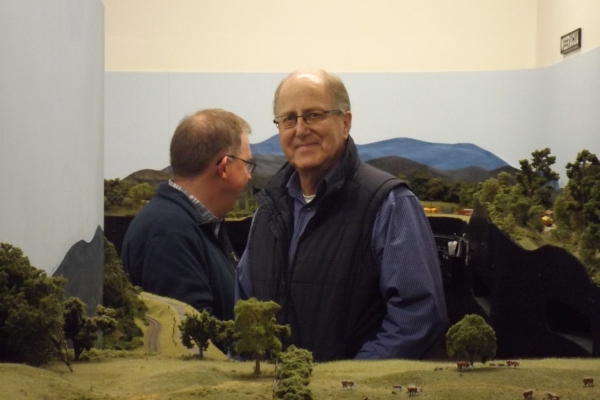 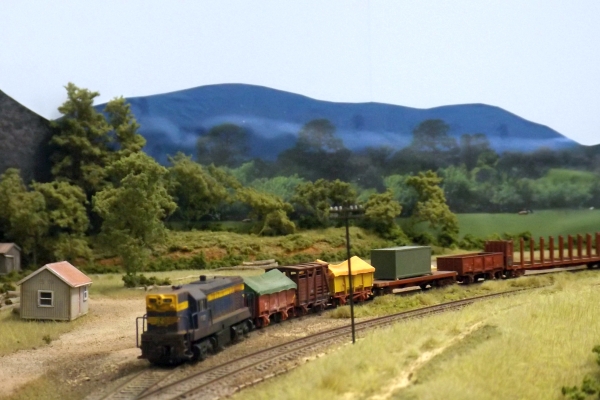 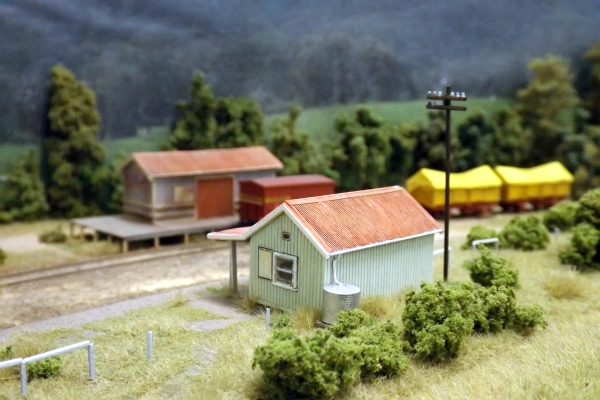 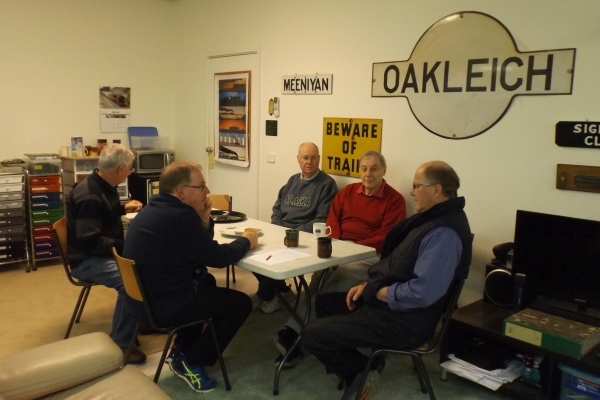 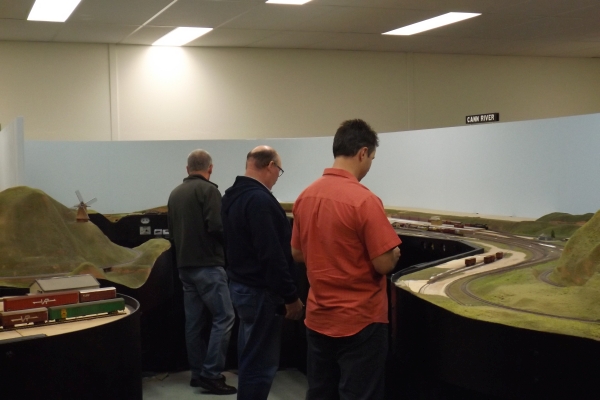 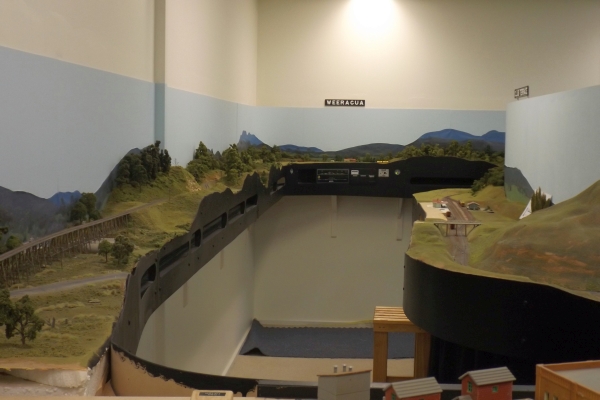 Apart from the glitch with the DCC system, the layout ran like a dream. I'm already looking forward to my next chance to operate on the Cann River.

Thanks for looking in.
Ron
Posted by Ron McF at 12:52 No comments: