At the top of his Zebras and Warbonnets blog, Geoff Hoad has a great photo (taken by C. Dwane Stevens) of the AT&SF main track just south of the Big Canyon quarry, where the rail line squeezes in between the Washita River and the Arbuckle Mountains.

Early in September I started to do some work on the rock faces that I'm building to represent this area on my layout.  I did some more carving of the foam 'cliffs' and then masked off the track in preparation for adding some plaster the next day.  As fate would have it, that 'next day' took several weeks to arrive.

Here's how the scene looked when I finished work for the day, all those weeks ago: 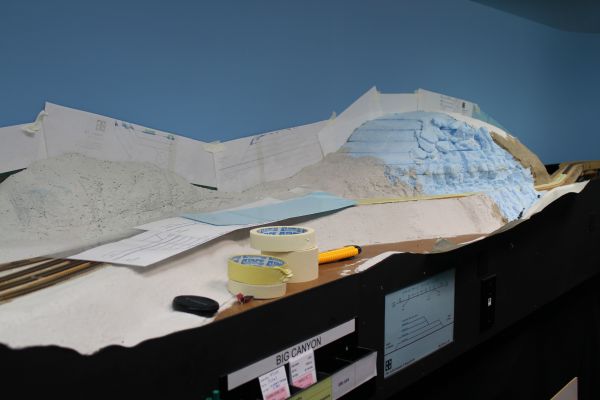 This is a closer view of the rock face: The technique I used was a blend of ideas that I had seen elsewhere. I started by filling the unwanted holes and gaps (especially those between the layers of foam) with plaster. A few days later I chipped away any plaster that was in the wrong places, and then repeated the process with grey grout.

While the grout was drying I painted on a wash of very dilute black paint, allowing it to soak into the plaster and grout. Unfortunately, I was too aggressive in applying this wash, and I washed much of the plaster and grout out of the gaps between the foam layers. Here's how it looked after this work: 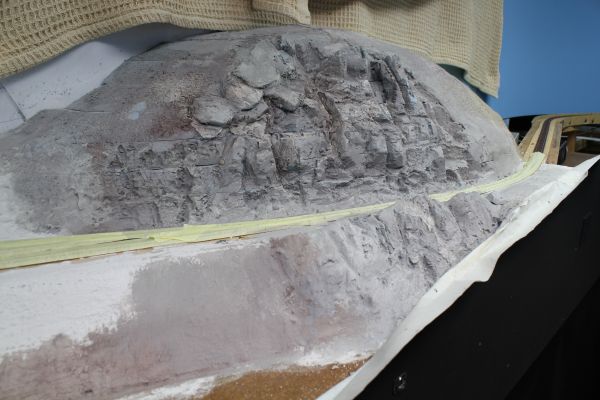 As the wash dried I noticed that in many places the blue foam was still showing through, So I painted these areas with various shades of thinned grey latex paint. After it dried I applied another layer of black wash to blend it all together.

To finish off, I painted the top of the hill and the river bank, both of which will eventually be covered by grass, bush and trees, with my chosen earth tones.

Here's how the scene looked as the paint was drying. 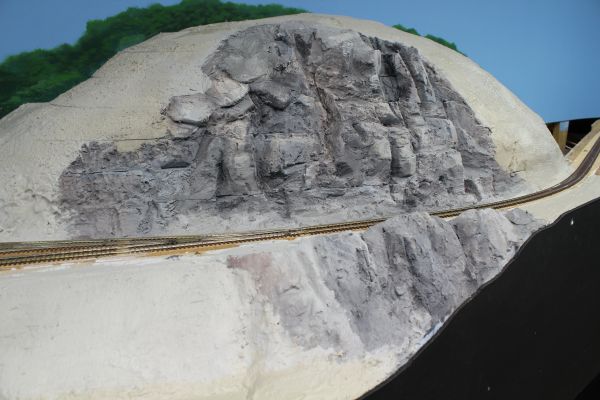 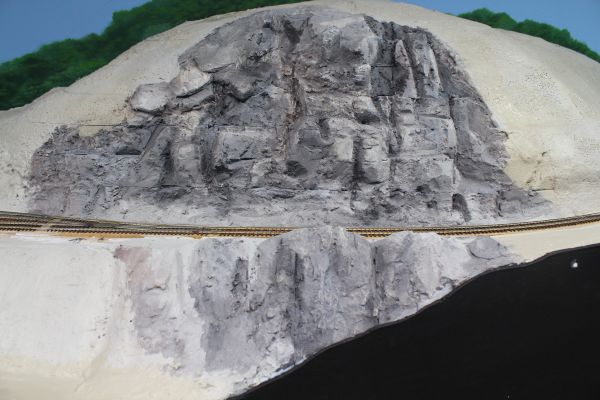 This is the first time I've ever tried to model a rock face, and I think that from a distance it looks fairly good. Up close though (at normal viewing distance) it's a different story. The horizontal gaps between the layers of foam, the rounded blobs of plaster, and the small gaps where the foam still shows through, all have to go.

The cliff face will stay as it is for now, but after my October operating session I will tackle it again.  I've learned a lot from this exercise, and I know I can do much better, now that I know what pitfalls to watch out for.

Thanks for following along.