Today I placed into service the first of several batches of new tank cars which will run in my "refinery extra" that switches tank cars at the Kerr-McGee Refinery at Wynnewood.

This first photo shows the six tank cars lined up on the siding at Wynnewood. The silver cars are stock Bachmann 36'6" single-dome tank cars lettered for TEXACO. The black cars are Micro-Trains 10,000 gallon single-dome tank cars that I painted and lettered for TEXACO, using decals that I got from a custom decal maker who is no longer in business. (That's a pity, as these were the easiest decals I've ever worked with.) 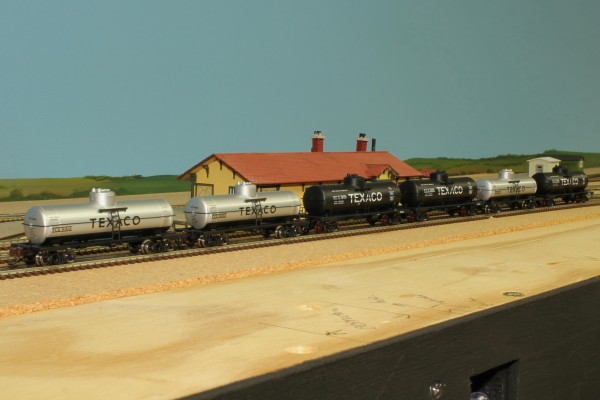 Here's a photo showing a side-by-side comparison of the two types of tank car: 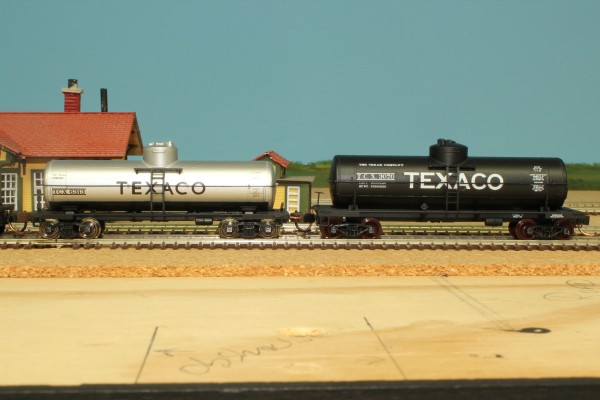 I'm very impressed with the Bachmann car. It has very fine details, low-profile metal wheels and operating body-mounted knuckle couplers (although I find them to be a bit big). It compares very well with Atlas and MTL offerings, and makes a nice change from the MTL single dome car.

Jerry's decals were a delight to work with, and they're the easiest decals I've ever applied. I used Tamiya TS-29 Semi-Gloss Black (spray can) for the base coat, and then applied Testor's Glosscote (spray) for a smooth surface to apply the decals on. When the decals were dry I gave the cars a coat of Tamiya TS-80 Flat Clear (spray can).  I only wish that it was that easy to paint and decal ATSF box cars.

I also have on order a Micro-Trains runner pack of TEXACO tank cars, and I can't wait to have the whole train in action.

A couple of days ago I discovered that one of the Atlas C55 turnouts in my township of Davis has failed. These photos illustrate the problem, and show how I corrected it.

First off, this is the faulty turnout. Testing revealed that both of the inbuilt jumpers from the stock rails to the short rails that exit the frogs had failed, leaving the short rails unpowered. 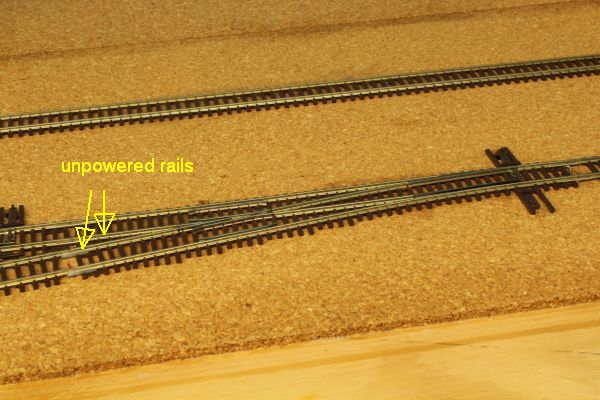 As one of the stock rails on the turnout to the immediate left (in the photo) of this turnout received power from this short rail, it too was unpowered, leaving me with a section of rail approximately 20cm (8") long that was 'dead'. The problem was exacerbated by the fact that these turnouts were laid when I was still operating on DC/cab-control, so I had used insulating rail joiners to connect them to the adjacent track blocks. 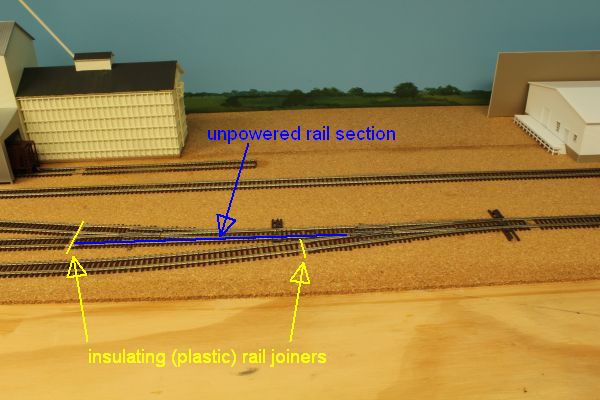 To fix the problem, I soldered new jumpers on the failed turnout, to replace the ones that had failed. Then I soldered power feeders ('droppers') to both turnouts, so I could power them the same way that I have powered my turnouts at Pauls Valley. 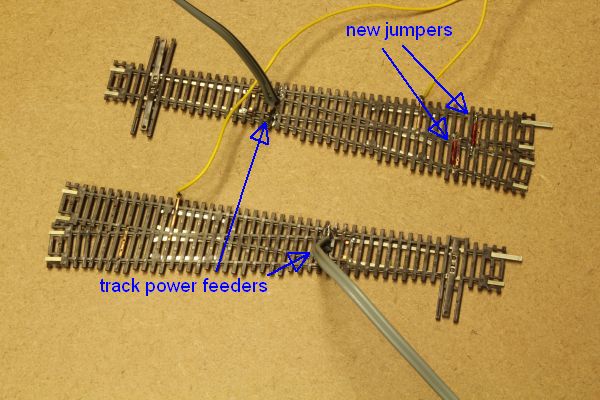 The yellow wires in the above photo power the frogs through slide switches.

I reinstalled the turnouts using metal rail joiners instead of plastic joiners. 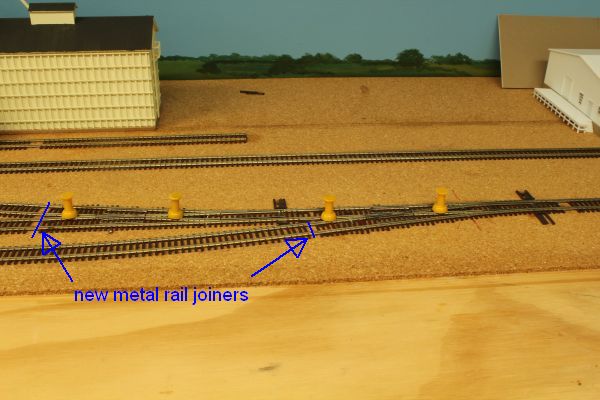 I was surprised to find that this turnout had failed as it has been in place for several years. Hopefully, with the changes I've made, I will have no further problems with them. However, it does make me think that I should replace the rest of the insulating rail joiners, and add power feeders to the remaining turnouts that I have at Davis and Wynnewood, before I start building scenery. Hmmmm............
Posted by Ron McF at 09:48 No comments:

Located in the fascia directly in front of each town on the GC&SF is a map which shows the names of each track and industry, as well as showing North and South. A few operators have asked me to include a map of the entire layout, showing where the towns are in relation to each other.

Here is an example of the revised town maps, which include the GC&SF 'route map': 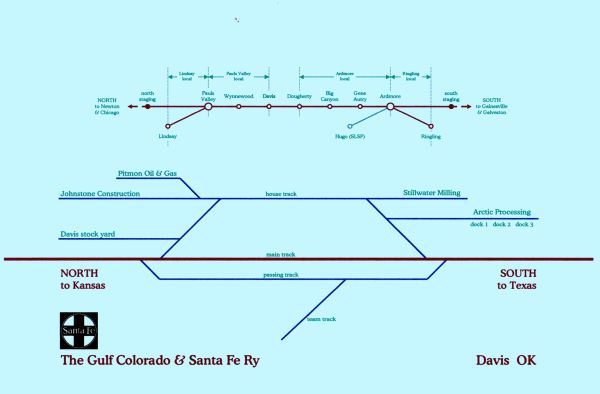 And here it is, after I've laminated it and installed it behind the fascia: 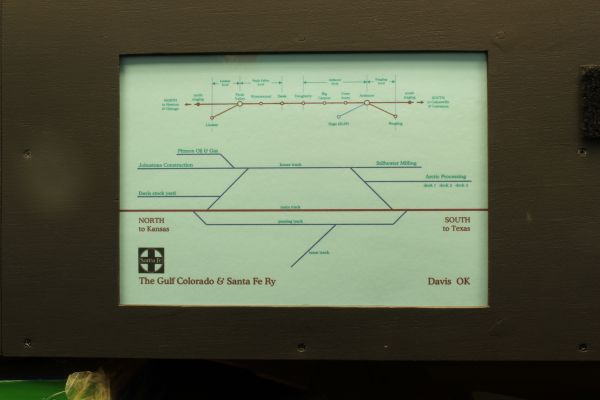 The small route map also indicates the territory that is managed by each local freight.
Posted by Ron McF at 12:06 No comments:

The GC&SF hosts operating sessions every two months or so, and the guys came over on the 11th of May to run the layout. Here are some photos that I took during the session. Unfortunately, I didn't set my camera up properly, so the depth of field is way too shallow.

Noel was the operator at Pauls Valley, and here he is sorting through car cards: 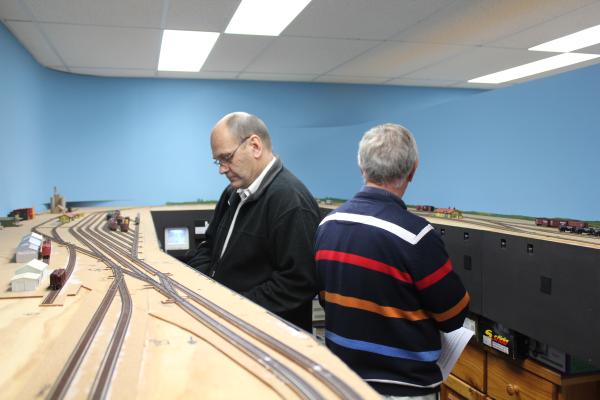 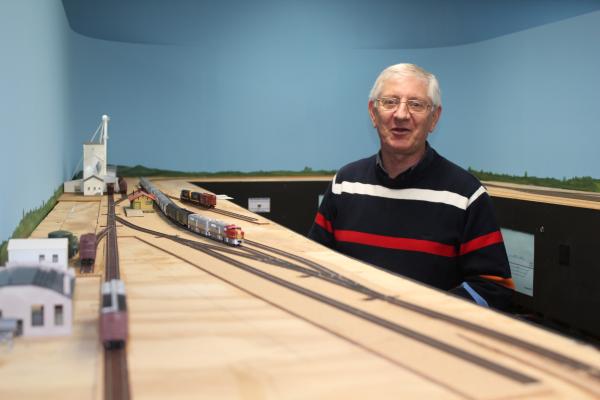 Rod and Vic 'chewing the fat' while they wait for departure time (using a fast-time clock): 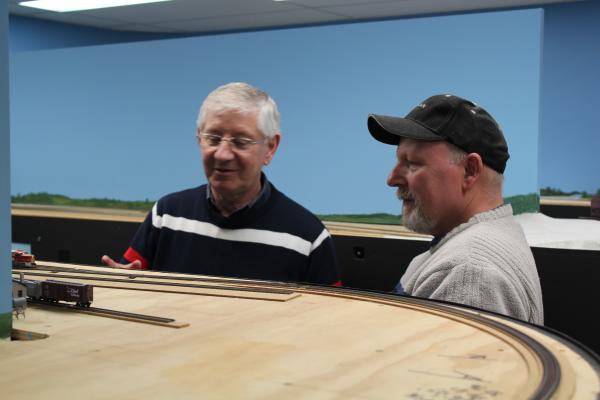 Barry switching stock cars at Davis, while Dennis waits for the track to clear: 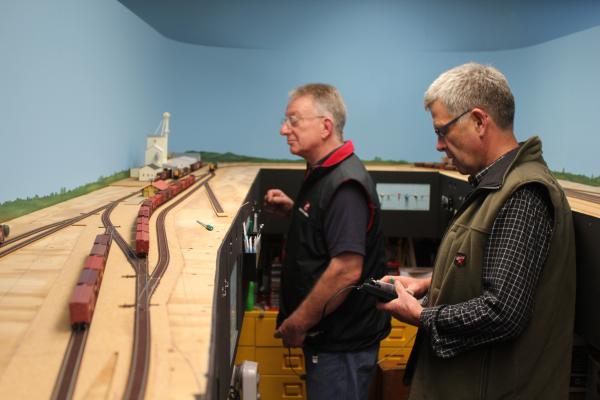 Dennis with train 37 southbound at Dougherty: 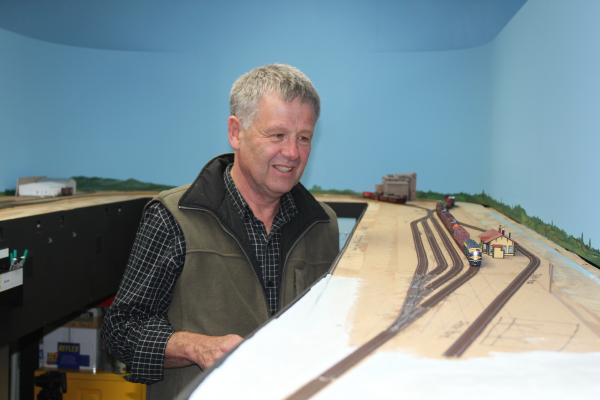 Barry again, this time with a local freight at Dougherty: 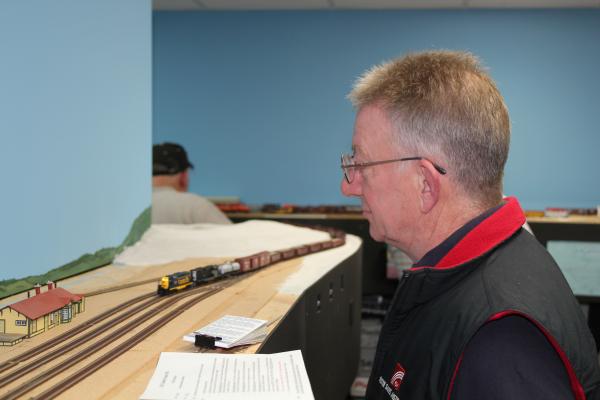 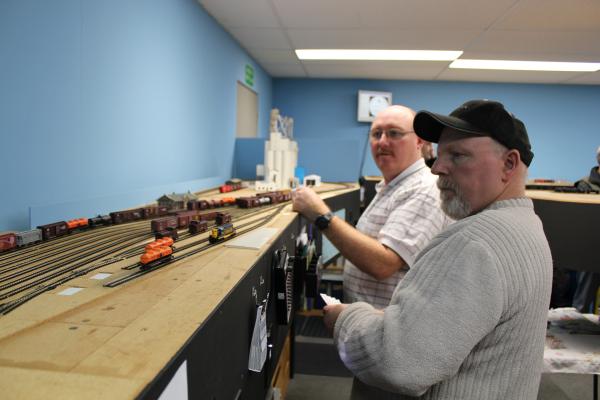 Greg and Barry at Ardmore: 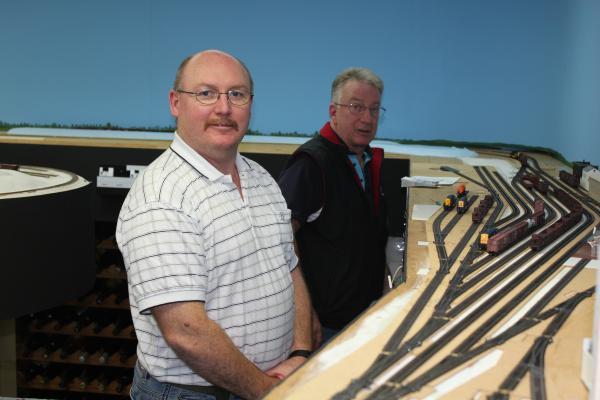 We were plagued by a problem with the radio system on the night. I'll have to sort that out before the next session.
Posted by Ron McF at 10:57 No comments: