I've added this page with the timetable that we use for operating sessions on the GC&SF. I actually started this page about two years ago, but never completed the write-up.

Over on his Little Rock Line blog, Allen H is experimenting with using graphite on his rails to improve electrical conductivity between the rails and loco wheels.  As graphite is used as a dry lubricant, it seems to me that graphite will cause wheel slipping problems, but I'm nevertheless interested to see what Allen finds.

Rod has chimed in with an explanation of how we (in our little group) clean our wheels and tracks. We've both mentioned this process several times in online forums, but it always seems to be new to someone, so I've created this page to illustrate the process.

To be honest though, after reading the articles that Allen has linked to I'm wondering whether there's such a thing as having your track 'too clean'. There seems to be a lot of opinion that using graphite is the way to go. I'll be interested to see what Allen thinks after he's been using graphite for a few weeks.

I've been working on the railroad ....

Between my part-time job and working in the yard I've been pretty busy lately, but I've still managed to get some jobs done on the layout.


Last week I prepared car-cards and waybills for a bunch of new freight cars that I acquired over the past 18 months or so, so we can use them for future operating sessions.


By 1960 (the year I model) the Santa Fe was no longer painting cars in the "map/slogan" scheme, but box cars in that scheme were still quite common. These PS1 "Bx-57" cars from Atlas are (in my opinion) even nicer than the various models of AAR "map/slogan" cars that I have from Intermountain. I bought all 4 road numbers recently released by Atlas: 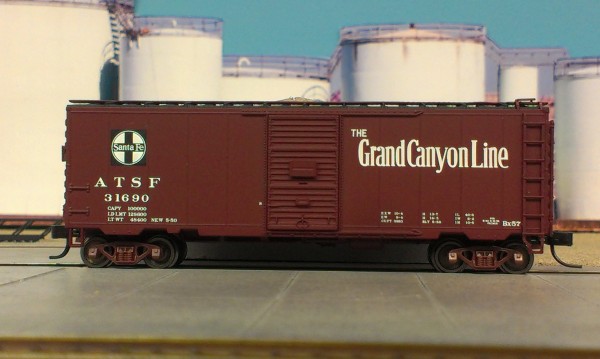 George Hollwedel told me that Atlas is intending to do another Bx-57 run with 4 more car numbers. Bring them on, I say.


I think that Intermountain has released these flat cars under their own label, but the six road numbers that I bought came from George Hollwedel. 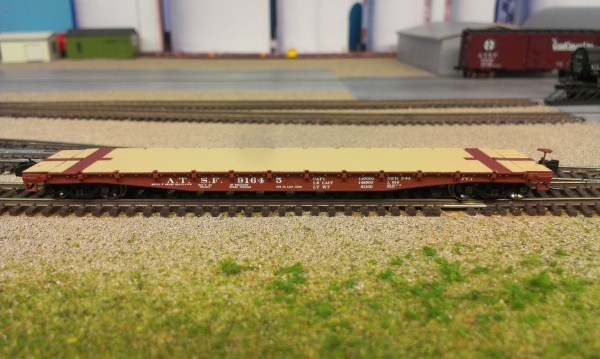 These cars are also very nice, and I'm now looking for suitable loads for them. They make me want to also buy a few of the BLMA 60' Ft-7 flat cars for a little variety.


I've wanted some diesel-fuel tank cars to fuel my locos at Pauls Valley and Ardmore, for some time. I bought the decals to produce some myself, but when George Hollwedel commissioned a 3-pack set from MTL I grabbed a set from him instead: 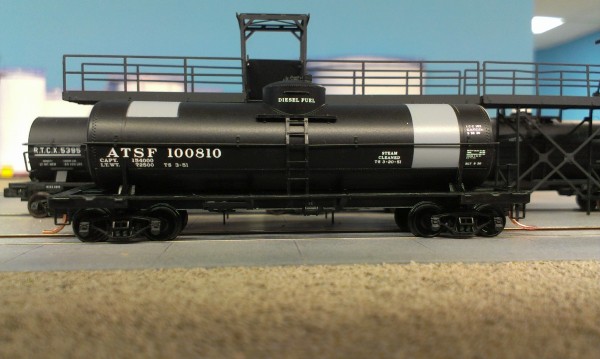 Unlike the models of the Bx-57 and Ft-V cars, which are pretty accurate models of ATSF prototypes, these tank cars are just good stand-ins. But they capture the look very nicely, and will do until something better comes along.

Planning for a timetable revision


The current operating timetable uses a 6:1 fast-time clock, and represents an "18-hour day". A complete operating session requires 3 hours of train running, split into two ("morning" and "afternoon") 90 minute segments each representing 9 real hours. However, when we add in extra time for 'show-and-tell' at the start of the evening, and a break for beans, a session can take over 4 hours if we run the full schedule. Needless to say, we usually end the session before all the trains are run, leaving me to sort out the mess the next day.

In addition to slowing the clock, I also want to add in two more trains. I already have the rolling stock to allow that, and the staging yard tracks will be available. I just have to make some small changes to the timetable.

As mentioned in my last post, my sound-equipped BLI PA/PB locos couldn't make it around my layout without stalling on some of the turnouts.  My main concern was with my Peco C80 points in my hidden staging yards, but I also found that they had problems with some of the (visible) turnouts at Wynnewood and Dougherty. I can't use these beautiful locos for an operating session until these problems are resolved.

Re-gauging the wheelsets (all of which were just a tad too tight) seems to have solved the problem with the Peco C80 points in hidden staging, but I will continue to conduct tests until I'm certain that I have 100% reliability.

At Dougherty I had yet another problem with my old friend arch nemesis, the southern-most ME turnout in the yard. It seems like every time I add a new loco, it has problems with that turnout. An hour or so of work has fixed the problem (but for how long, I wonder.)  I am so-o-o tempted to replace the turnout with one of the newer DCC-friendly turnouts from ME.

Over at Wynnewood I found a totally different problem with an Atlas C55 turnout - one of the built-in jumpers connecting the stock rail to the closure rail had failed. I've experienced this problem before, with a turnout at Davis, and this afternoon I corrected it the same way. In the process I replaced half a dozen insulated rail joiners (left over from when that part of the layout was originally wired for DC/cab-control) with metal ones.

Just two days ago, John C and I were discussing that very problem with Atlas C55 turnouts. I think he jinxed me.

During all this testing I observed that the back end of the rear truck on the PB unit bobs up and down ever so slightly when the loco is creeping along. My guess is that one or both of the traction tyres on that axle are not quite seated properly. When I bought the locos I also bought a couple of extra axles without traction tyres so I could get rid of the tyres. Unfortunately, I've forgotten where I put them "for safe keeping".

If you're still with me, then thanks for reading.