I've been doing a bit of work at Wynnewood lately, and the basic scenery is coming together. This photo shows the work in progress.  The roads are done, and I've made a strong start on the base ground cover in the gravel and grassy areas.  The area in the far distance is looking dark because the ground foam is still wet. 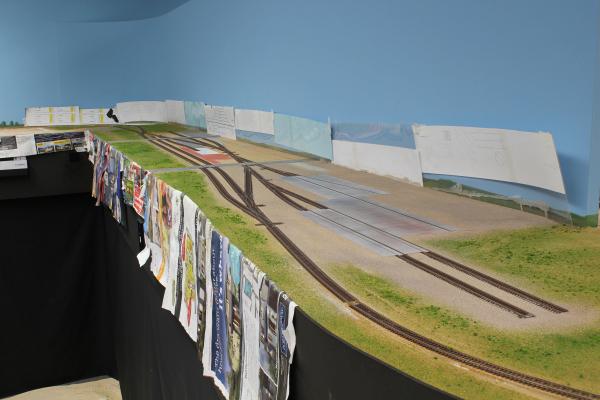 Here's how it looked a few days later, with the cars and structures set up in readiness for my operating session of 16th August: 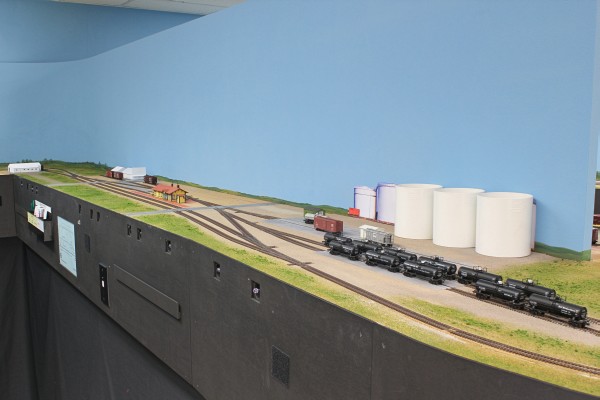 I still have more work to do in the area behind the station, but I can't do that until I've decided what structures will be used there. I've also noticed that TrainCat is once again posting on the forums, and I'm hopeful that I'll soon be able to get some loading platforms for the refinery (they'll sit between the tracks where the tank cars are sitting).

I'm a big fan of car-card and waybill systems, but one of its weaknesses is the need for the operators to manage/juggle a bunch of cards in addition to running the train. It helps greatly to have 2-person crews, so one can drive the train and the other can handle the paperwork as would a real conductor. Then there's the question of where can the conductor place the cards so he can sort out what work has to be done. If the layout has no scenery then they might be tempted to place the cards right on the layout itself, but that's not acceptable if the layout has scenery.

To help my crews, I've installed shelves (for want of a better name) like this around my layout: 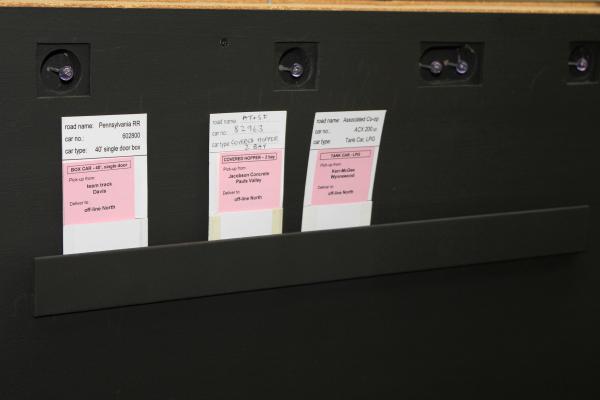 I stole this idea from Rob McM's "Pacifico" layout.

My shelves were made by gluing a 10mm strip of 3mm MDF board along the bottom edge of a 35mm strip of 3mm MDF. They were then painted and attached to the fascia using double-sided tape. You can get a better idea of how they're made from this next photo: 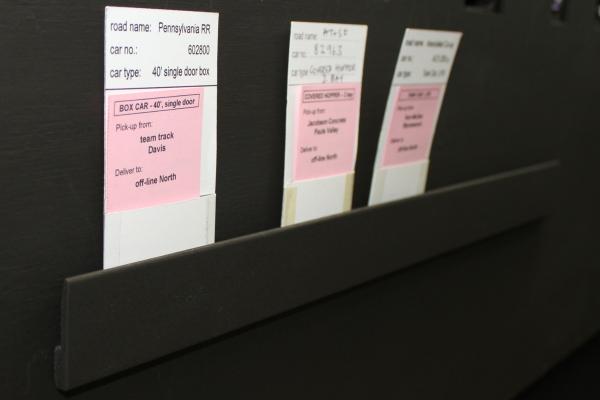 I contemplate that when a train arrives at a town to do some switching, the crew will place the car-cards for the cars to be switched out, or perhaps those to be collected, in the shelf nearest to the industry. Whatever works for the individual operators is fine with me.

My shelves haven't been tested in an operating session yet, but John F. has made some as well, and says that they worked out very well, and he received favourable comments from the operators at his last session (which I was unable to attend).