Operating session on the GC&SF

On a bleak, wet, wintery day, what could be better than to have some friends over to play trains...?  Yes - yesterday was  Operating Day on the GC&SF.

Due to unexpected illnesses we were a couple of operators short today, which made it challenging to keep up with the timetable during its busier periods. Nevertheless, we managed to get through most of the trains called for on the schedule: 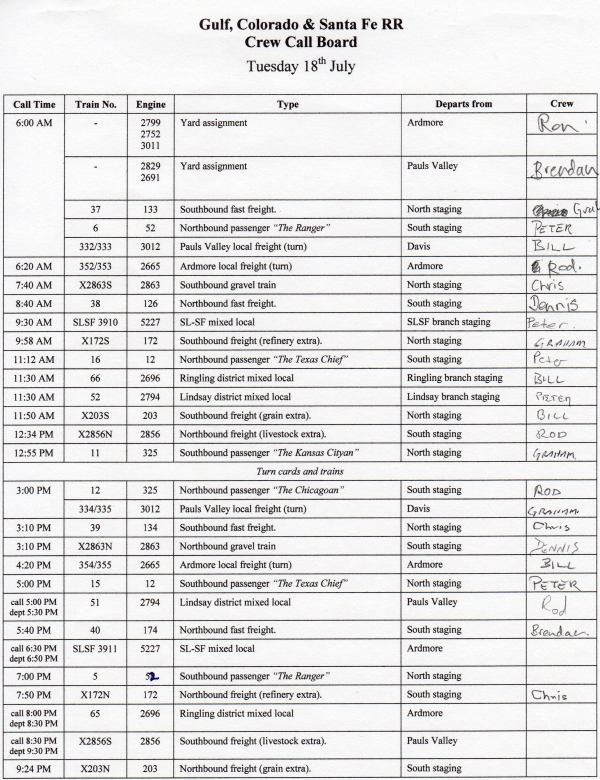 Brendan ran one yard and I operated the other. Between fielding general questions and running the yard I had a very hectic time, and I'm very glad that I changed the system so that the Lindsay, Ringling and Frisco locals are operated by guys from the 'engineers pool' instead of the yard operators (as they used to be.)  Brendan, on the other hand, was so far ahead of the game that he had time to run a through freight!

Here are some photos that I took during the session:


Chris also took a bunch of photos, and emailed them to me so I can include them here:


Although we had a few minor glitches, I'm very happy with the way the layout operated, and especially with the way the guys ran things. Thanks for coming over guys - as Graham would say, "I love your work." Also, a special thanks to Brendan for taking time out from running the Pauls Valley yard to assist the newer operators, and to Chris for allowing me to share his photos.