I had a few guys over last Tuesday so I could give them some tuition and practice in running the yards on my layout.  They took turns running through-freights around the layout, and switching cars in and out at Pauls Valley and Ardmore, just as they would during a normal operating session.

John has actually run a yard several times before, but the only training he had received was "on the fly", during sessions. For him, this was an opportunity for me to fill in a lot of gaps.

I am pleased to report that the guys all did very well.

Here are a few photos that I took to remember the day by.

I'm very grateful to John, Chris, Derek and Graham for volunteering to learn this role as it is critical to the success of my operating sessions.  Now I've just got to sort out the mess we left the yards in, and then I can organise a session where the guys can do the job for real.

I've been experimenting with different ways to site structures to represent the Pauls Valley downtown area behind the depot. My first thought was to place a row of DPM and Merchant's Row retail structures along the street, backing on to the wall. But the real buildings along Santa Fe Street are more industrial in nature than retail.

This is how the mock-up looks at present, but I still need to do some scratch-building and kit-bashing: 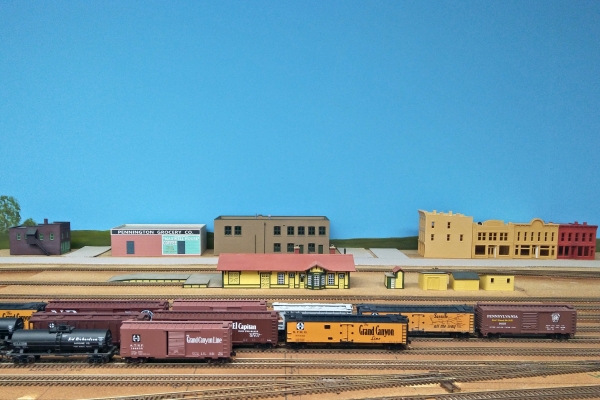