I has been a long time since my last post. I kinda lost my model railroad mojo after that last session, when things didn't go as well as I'd hoped. I had (and still have) a few problems that I need to resolve since that session, but I didn't have the motivation to fix them.

But I haven't been completely idle since then. I've been working on several structures for the layout, and most recently working out where to place them once they're finished.

Thanks to some amazing research by my friends Geoff Hoad (in Sydney) and Mark Parry (in the UK), I now have a very good idea of what industries were served by the GC&SF in Pauls Valley back in 1962. That's just two years later than I am modelling, or close enough! Most of that information came too late for me to design my track plan for Pauls Valley around it, and I don't have the space to do that anyway. But I will try to include as much as I can.

One surprising (to me) discovery from Geoff's work was the number of oil distributors that had small receiving warehouses along the rail siding to take delivery of bulk and packaged (drummed) oil products. The following cropped image from an aerial photo taken in 1962 shows those structures that still existed in 1962. The industry names are from a 1942 Sanborn map, and may not be accurate for 1962. For example, by 1962 the Field Bros and Cities Service facilities were owned by Gulf Oil.  However, I'm going to stick with Field Bros. Co for my model as I like it better than Gulf Oil. 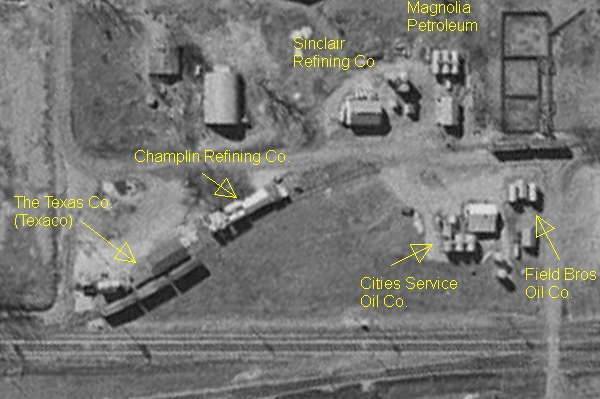 That  larger photo from 1962 also revealed what Jacobson Concrete looked like back then, showing the location of the ready-mix concrete plant, and the then single silo for drilling mud (the structure casting the long shadow at the bottom of the image.) 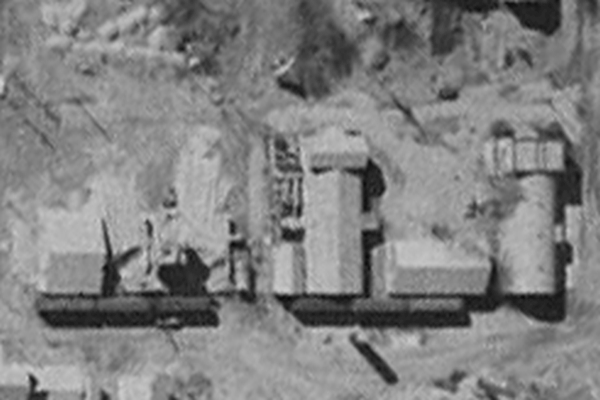 One of the most interesting things revealed by the 1962 aerial photo is the number of freight cars that were received by these industries. There are three 40-ft box cars at the Texaco building, and six at Jacobson. The evidence suggests that in 1960 Pauls Valley was a busy place as far as railroad activity was concerned.

As I mentioned, I don't have space to model Pauls Valley accurately, but I will try to represent the industries that operated in 1960. I've laid a little more track, and been experimenting with my partially completed models to see how they will fit the scene. The following photos show my current thinking.

This photo shows Field Bros. Oil along the left and Gordon White Lumber on the right. The siding that Gordon White is located along is new. 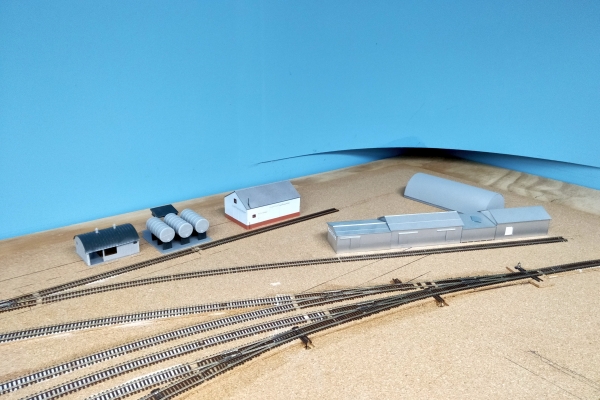 This photo shows Jacobson Concrete on the left (the ready-mix plant will go on the far side of the buildings), and small grain elevator on the right. 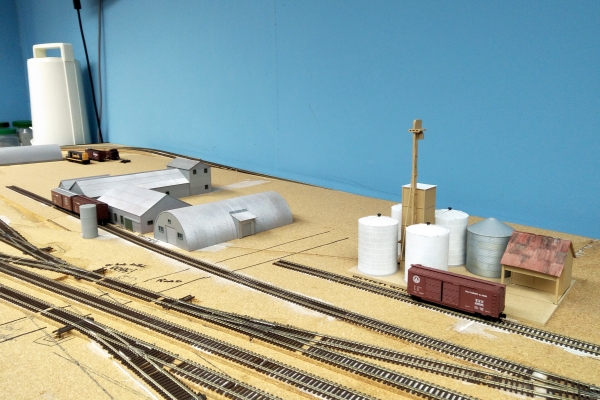 The "downside" of reworking Pauls Valley is that I will be increasing the amount of work to be performed there during an operating session. I already have a strategy to tackle that, but that will be the subject for another post.