I had arranged for a friend to come over today to help me seal the timber decks, but the forecast top temperature of 38C put an end to that idea.

Instead, after finishing my daily chores, I headed down to the train room and cleaned the layout.  It was actually a lot less dusty than I had expected, although the thousands of dead ants and spiders scattered about made the layout look like it was used to film both Them and Tarantula.

Once I'd done with the vacuum cleaner, I wiped down the mainline with lighter fluid using a cloth wrapped around a small block of wood.

Then I set up my track-cleaning train - four track cleaning cars (my own Huey, Dewey and Louie plus a borrowed Aztec car) sandwiched between a pair of SD24s, and set it to doing laps around the layout: 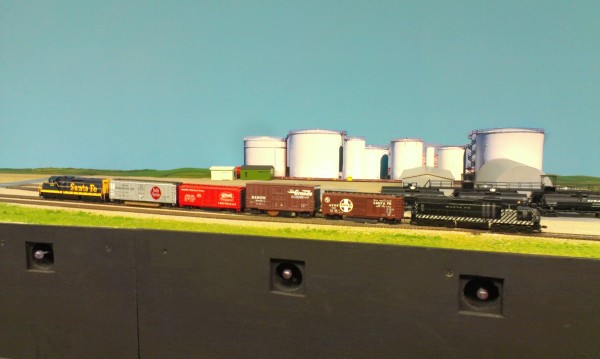 The two end cars are home-made sliders. The pads are rectangles of masonite held loosely in place by nails that run up through holes in the floor of the cars. At the top of each nail I fitted a fishing sinker by squeezing it to the nail with pliers. 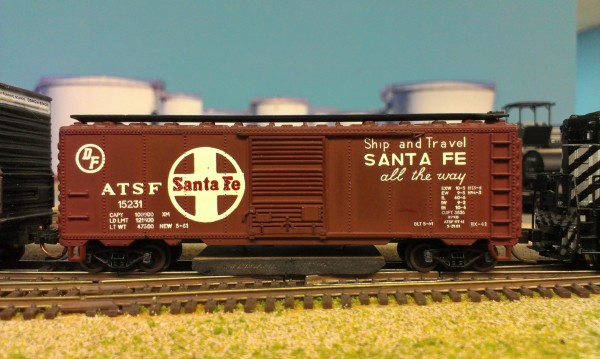 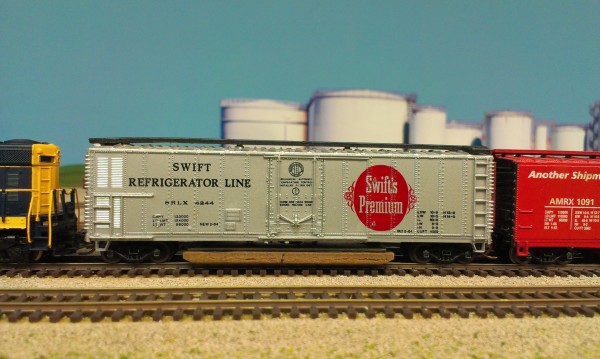 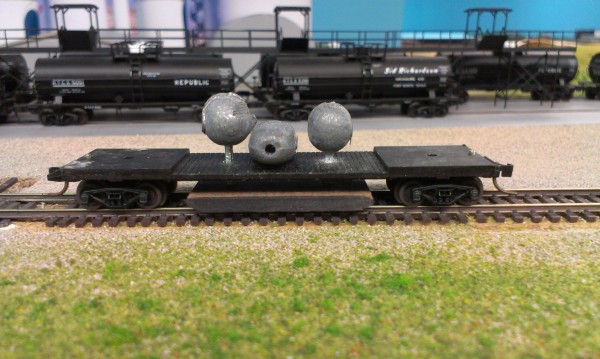 The holes in the car floor are just wide enough for the nails to slide freely. The sinker glued to the car floor holds the car on the track, and the sinkers on the nails press the masonite pad onto the rails.

The red car is an Atlas promotional car body that I mounted on a Roco track-cleaning car mechanism: 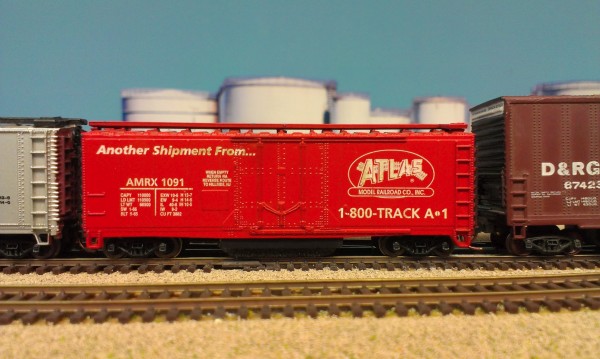 The fourth car in the consist is made by Aztec, and I borrowed it from a friend (Graham) in case I needed extra grunt to clean the track.  It can be filled with fluid, and it has a magnet to pick up any metallic material that might be laying on the track. You can just make out small bits of metal clinging to the rectangular magnet in the photo below. 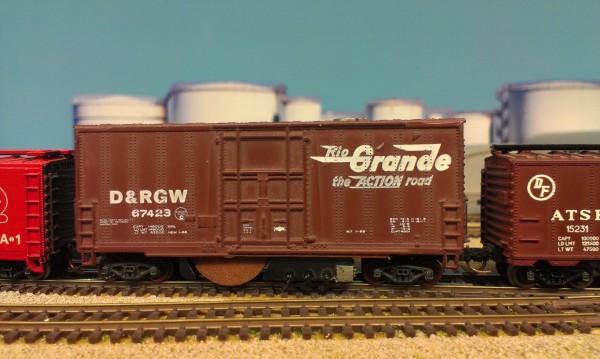 After every few laps around the layout I clean the pads and the loco wheels, which do much of the cleaning. When the loco wheels no longer get dirty, I know the track is good to go.

Here's a video I made of the track-cleaning train in operation:

Once I was satisfied that the mainline was safe to run trains around, I broke out my BLI PA/B locomotives.  I bought these locos about two years ago, just before we demolished the old house; but I barely had time to even test that they worked before the electrical power to my train room was disconnected.

Both my units are powered, and have sound.  A single powered A unit (plus a dummy B unit) would have been much cheaper, but is not able to pull one of my passenger trains up the inclines from the staging yards. This is only the second time I've run these locos and I still have to adjust the sound levels. Here's how they looked and sounded:

I tried to sound the horn at the grade crossings, but I couldn't do that and hold the camera (phone) steady at the same time.

Unfortunately, the PAs stall on one of the turnouts under the layout, so I have some work to do on that turnout before they can be used for an operating session.

Today I had the pleasure of operating on Peter's HOn3 "D&RGW" layout. Peter's layout is a 'work in progress' and the modelling is superb.  He has completed scenery on about one-third of the layout.

Peter has a collection of some beautiful rolling stock, including a bunch of Blackstone HOn3 steam locomotives that operate and sound every bit as good as they look. He also has a large collection of very nice scratch-built buildings.

Here are some photos that I took using my trusty phone camera. 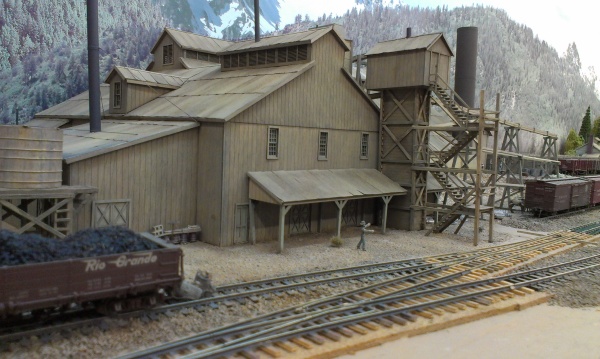 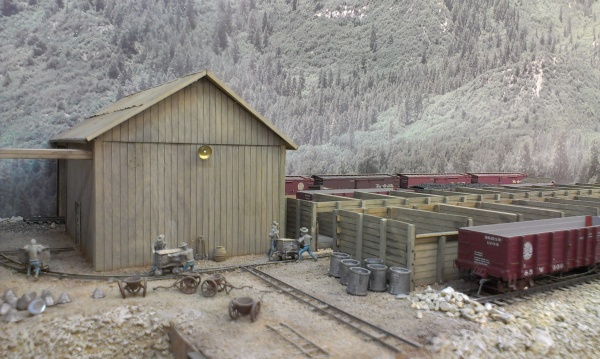 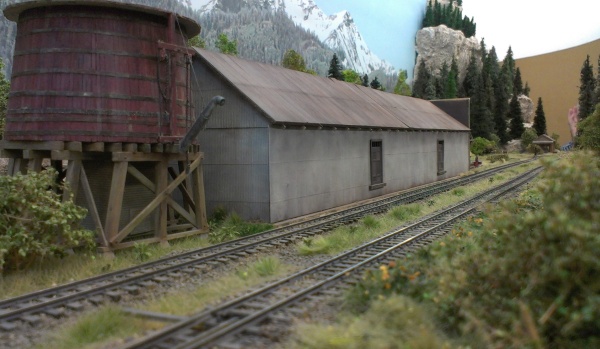 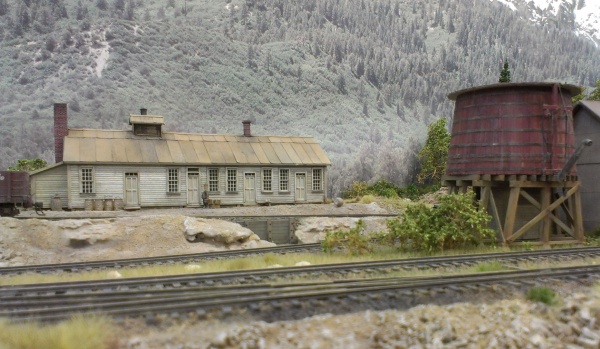 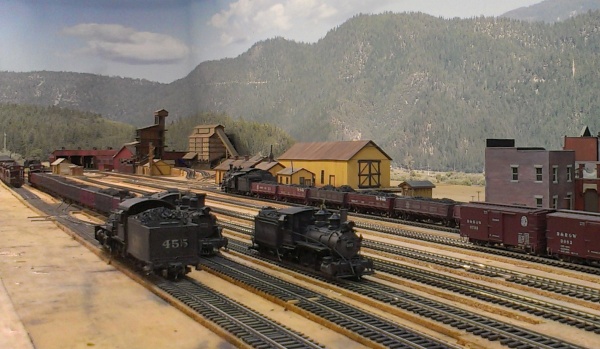 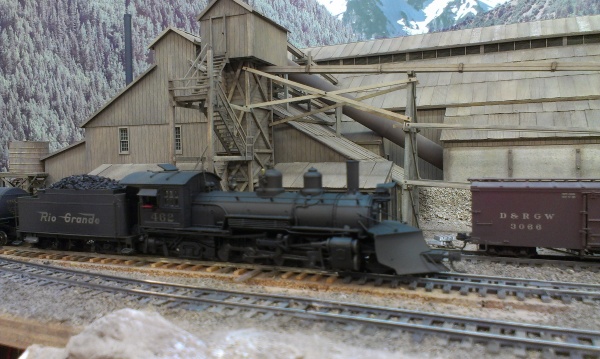 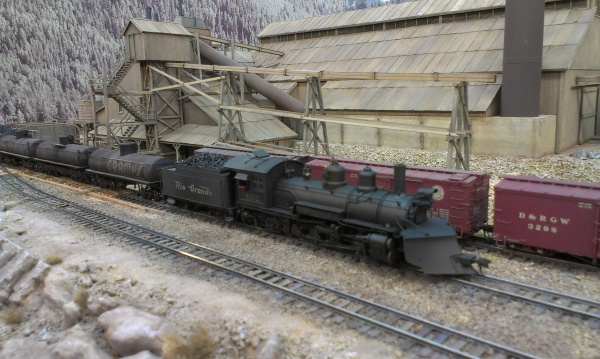 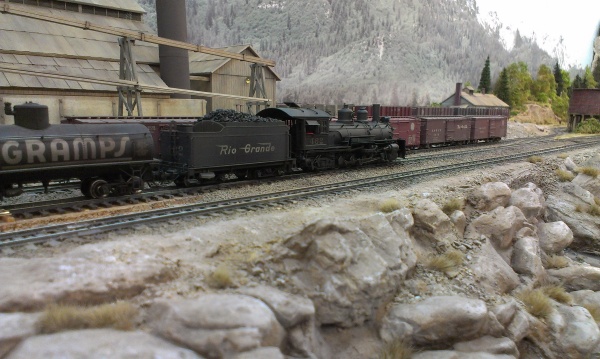 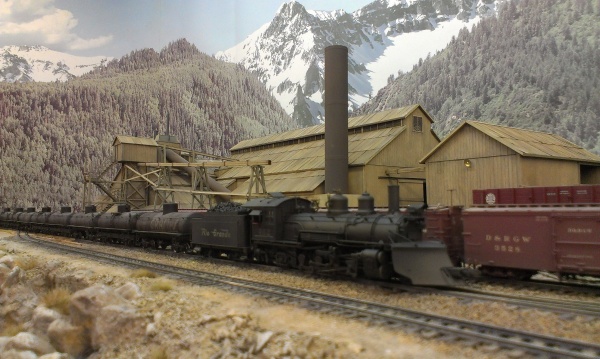 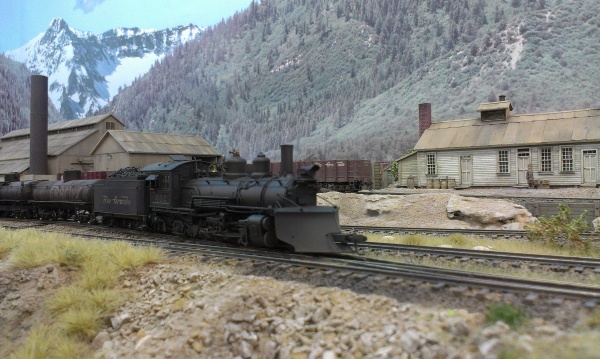 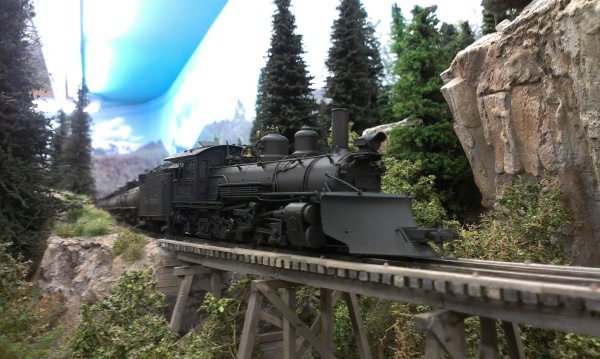 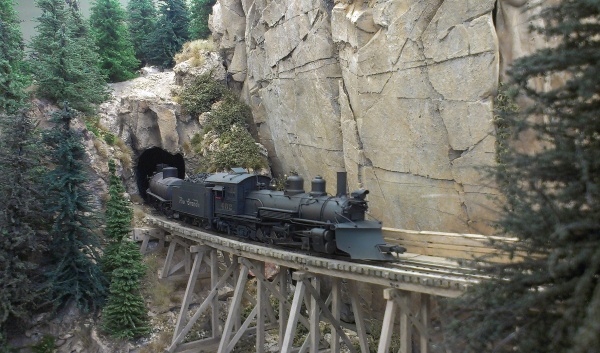 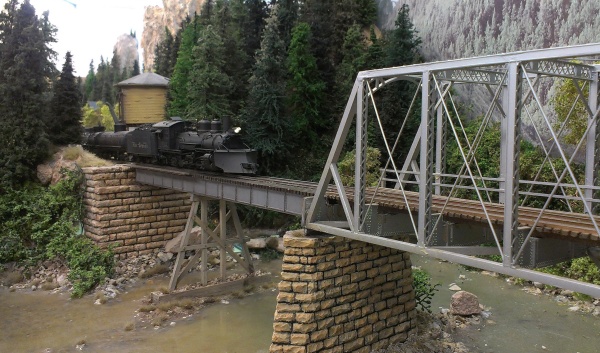 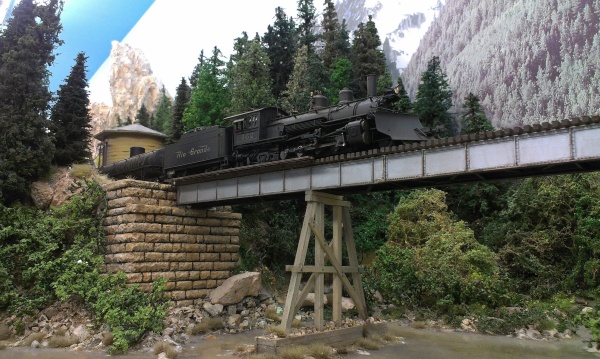 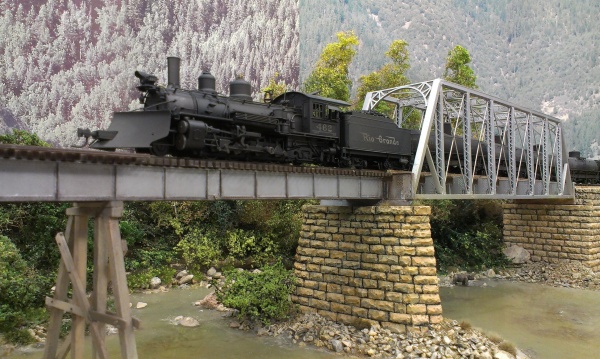 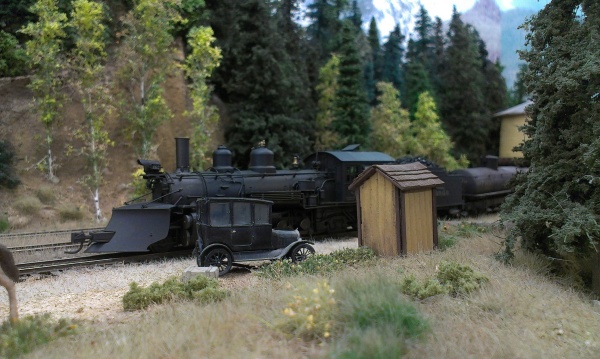 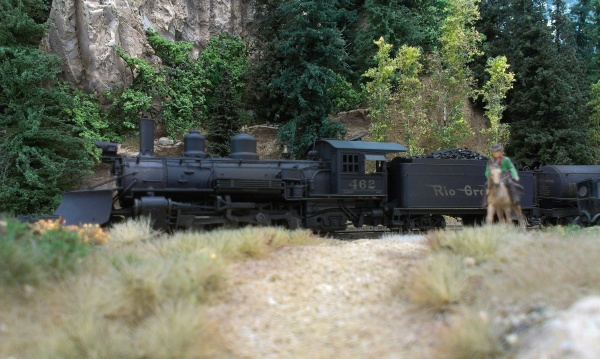 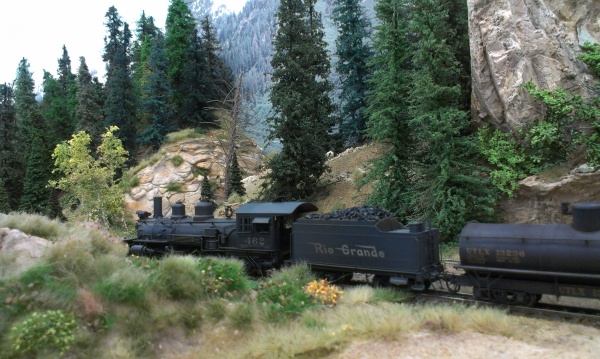 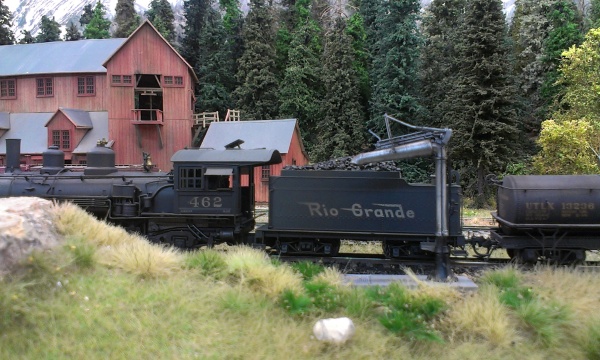 Peter is in the process of adding CC&WB operation, and I'm looking forward to getting down there again to do some 'serious' switching when it's done.


Thanks for hosting today, Peter. I was very impressed.

I bought a new power-board, one with both overload and surge protection, and replaced the one that I suspected of being faulty. Now the LocoNet works just as it should.

As I was carrying the old power-board to the bin I heard something rattling around inside the case. I think I was lucky to have not had a more serious incident.

Many thanks to Brendan for diagnosing the problem.

Email ThisBlogThis!Share to TwitterShare to FacebookShare to Pinterest
Labels: DCC

Some good news, .. and some not so good news.

It has been more than two years since we had the last operating session on the GC&SF. When Beth and I demolished our old house we expected to be in the new one within nine months. Well, that nine months turned out to be eighteen months, but we finally moved into the new house last December.

Today I moved out the last of the house-hold stuff we were storing in my train room, and then gave the carpet tiles a bit of a clean with the vacuum cleaner.  They really need some industrial strength cleaning, especially around the door-way which collected a lot of mud over the last 18 months as we came and went. With the carpet cleaned (more or less), the room actually looked quite presentable, and I couldn't resist the temptation to see whether the DCC system would operate.

I was greatly encouraged when I turned on the DCS100 and the track power indicator LEDs lit up right around the room!! However, my glee turned to disappointment when I plugged in a UT4 and its status light didn't come on. My second UT4 did no better, and neither did my DT402D when I plugged it in.

Next I powered on the UR92 to check whether I had wireless control. I placed a battery in my DT402D and then plugged it into the UR92. It correctly reported "GC&SF"!

Then I dialled up the nearest loco I could see on the layout - an FT A/B numbered 126.  The headlight came on, and the loco crept forward as I turned the speed knob.  As the track is quite dusty, I only travelled a few inches - just enough to confirm operation.

Well, at least I had wireless operation, even if the LocoNet isn't working.

After dinner I called Mister Wizard for advice. He thought that perhaps the LocoNet throttle jacks were not receiving any power.

"A possibility", I said as I had added a separate power supply to feed the jacks as shown here.

As Brendan suspected, I found that the plug pack was not supplying current to the bus wires. I initially thought it had failed, but after removing it and doing some bench testing, it seems fine. Then I remembered that I'd had a similar problem before with the previous plug-pack, and that it later tested okay as well. It's late now, so when I get home from work tomorrow I will take a look at the power board I am using there to share power with the DCS100.