Last Friday evening Greg hosted the gang for an operating session on his L&N Knoxville Division layout. Here are my photos from the session.

Brendan took on the job of running the Knoxville yard: 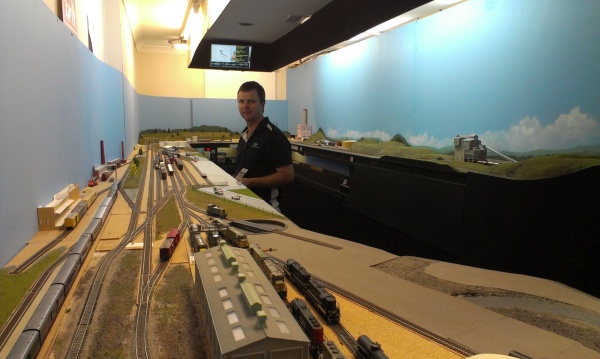 Here he is again, using the card sorting shelf. I wish I had left room on the fascia for something like this. 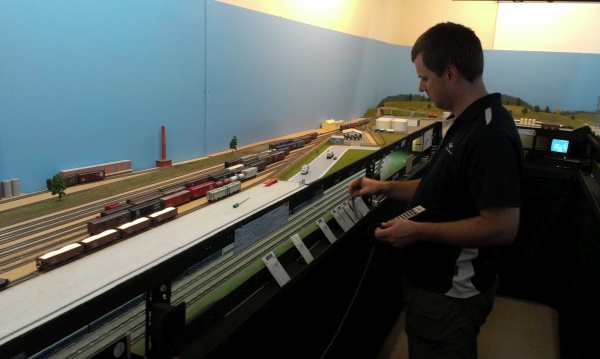 Here's the loco facility at Knoxville: 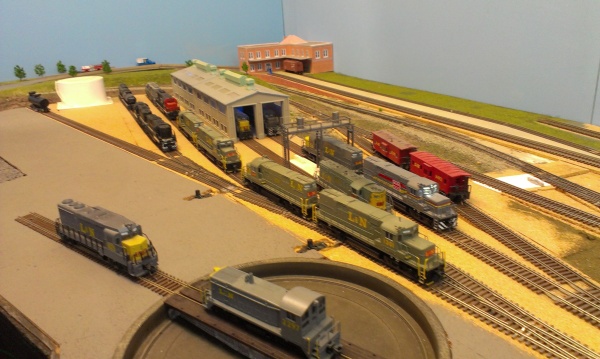 Pure Oil Co. is located on the outskirts of Knoxville: 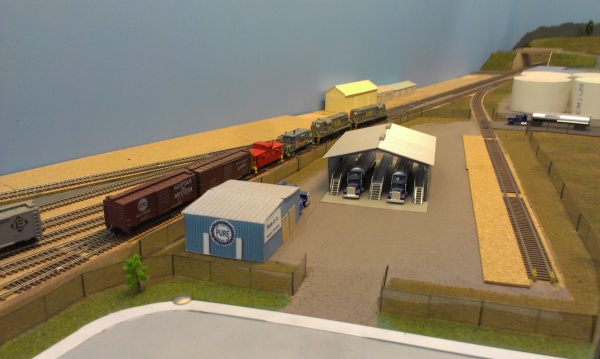 This transfer crane is also located at Knoxville. I took the photo because I want one for Davis (on my layout) but I've been too slack to build one. 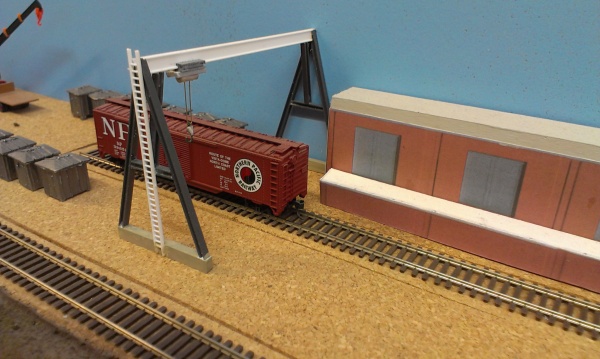 The first stop out from Knoxville is Oak Ridge, on the right in the photo below.  The industry complex in the rear right corner is (IIRC) the Bull Run Power Station, which is located at one end of a two-track 'loads in - empties out' coal cycle. Loaded coal hoppers enter the complex, and empty hoppers exit it. 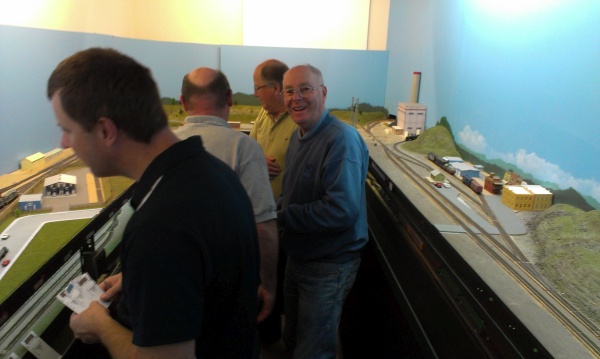 At the other end of Oak Ridge there is a quarry. 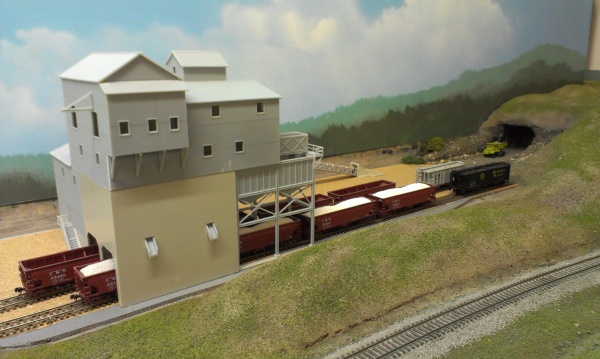 Next stop is La Follette, where a train being crewed by Rod and John F. is using the long siding for a meet with Graham's train. 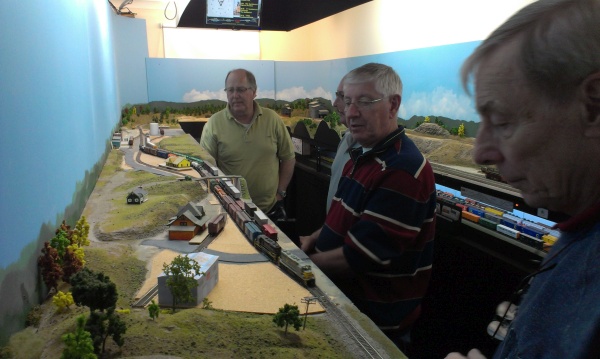 Further down the line is Morley.  Greg is explaining something to Dennis (at the back) and John F.  The track along the backdrop is the branchline to the coal mine (at the far end). 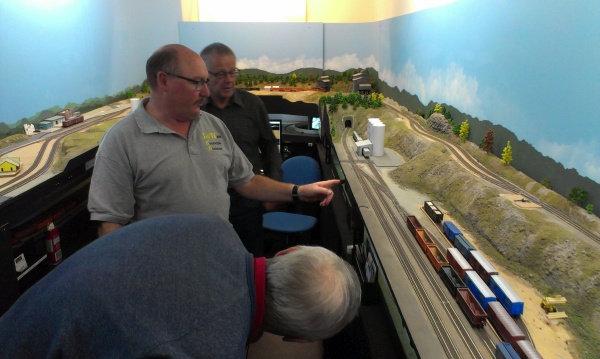 Morley is home to the Butler Paper Mill: 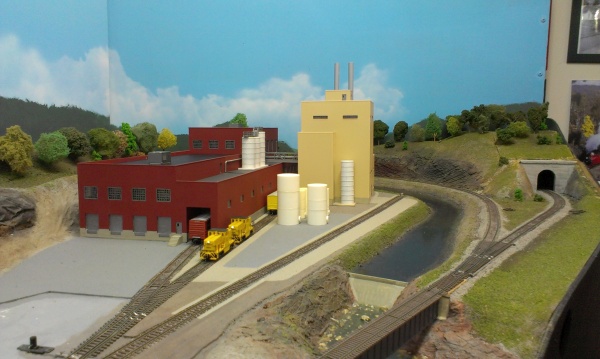 The track that branches off to the tunnel portal is the branch-line to the coal mine at the other end of the 'loads in - empties out' coal cycle.

Here is the mine. The loco is on the 'loads' train, and the caboose (middle track) is on the rear of the 'empties' train. 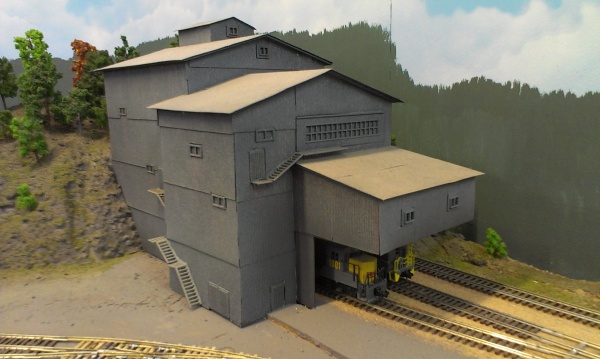 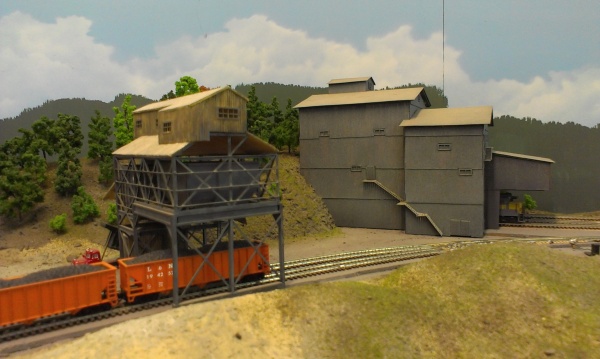 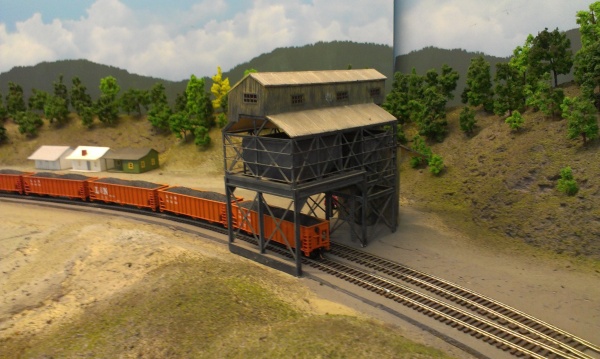 While reviewing these photos I realised that I should have taken some closer pics of the monitors that Greg has positioned high up at the end of both peninsulas. You can see them just above Brendan's head in the first photo, and above Graham's head in one of the La Follette photos.  The monitors show the current system time (using a fast-time clock), a route map, and a real-time display of what trains are scheduled for departure.

Thanks for hosting the session Greg, and for the supper. The layout performed very well, and I enjoyed running the trains I operated. I'm looking forward to the next session.