In my previous post I mentioned that I have 'discontinued' one of my passenger trains (Trains 5 and 6), and rearranged the consists of the other passenger trains to more accurately model the trains that they are based on. Rather than leave a hole in the timetable, I added an extra through freight - well, two actually, one in each direction. My initial plan was to simply have these through freights run on the discontinued passenger trains' schedules which would have required very little change to the timetable and the associated train instructions. And so, I sent out the invitations to an operating session to be held on 26th March, and set to work rewriting the necessary instructions.

Then, just three days before the session, I had a flash of brilliance stupidity. Instead of scheduling these two new freight trains to run non-stop from staging to staging, why not have them stop at the yards to pick up and set out cars that are moving between the yards. In the past those cars were moved by the Fast Freights (Trains 37, 38, 39 and 40), but they were often forgotten about. So I spent the last few days before the session hurriedly adjusting the timetable and rewriting train instructions.

Before the session started I warned the guys that there were probably errors in the instructions, and to watch out for possible problems. I figured that I would just trouble-shoot them as they arise, like I always do.

What I didn't take into account was that I had only one experienced yard operator (John C) for the session, and it therefore fell to me to run the other yard.

And so the stage was set for a disaster. Operating a yard is a full time job in its own right, and the questions and problems arising from my timetable changes required a lot more of my time than usual. And if I wasn't already as busy as ten men, I had two turnouts fail!! (That just does not happen on the GC&SF.)

The feedback I received from the operators was that they had a good time, but I personally found the session to be very stressful.

I was so busy that I didn't even think to take photos, but fortunately Chris and Derek both brought their cameras, and they have graciously allowed me to post their photos here. (Thanks guys.)

My thanks go to Chris and Derek for allowing me to use their photos. Chris is a regular GC&SF operator, and I've posted his photos before. I like that he takes pictures that I never think to take (such as the photo of the tree, with the box car sitting at Musgrove Lumber in the background.)

Derek is a new crew-member, and he brought with him a camera that does image-stacking in the camera. Yowzers! It produces some impressive photos, but you do have to be careful when you're taking candid photos. Here are two photos that Derek took looking along Pauls Valley yard. The distance from the stock car in the left foreground to the elevator barely visible in the background is about 14' (4 metres). In the second photo you can see that Chris moved his hand a little while the camera was taking the six images that it would use for the stacked photo. 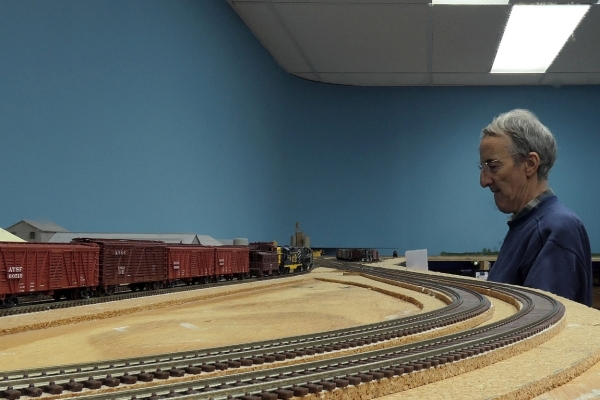 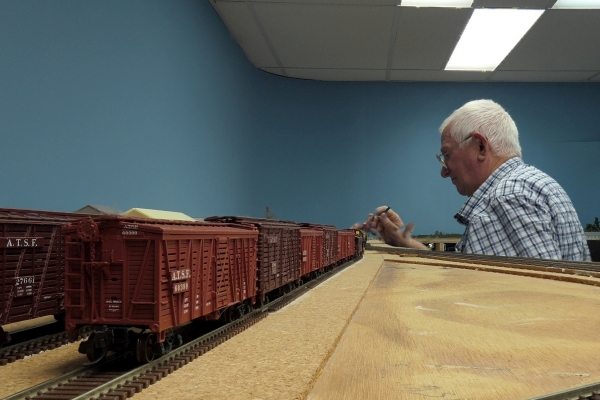 Thanks also to all the guys for coming over to run trains, and for tolerating my crankiness when things started to get tough (for me).  I'm not sure when my next session will be as I have a bit of work to do repairing/replacing one of the failed turnouts, and correcting the problems with the instructions.