After letting October slip by without a post, I decided that I should make a bigger effort to keep this blog up to date.  So here's an update on the scenery I've been working on since the last ops session.

This first picture shows the low hill that sits at the end of the Wynnewood/Davis peninsula. The hill will be moderately wooded to provide a sight screen, blocking the view from one side of the peninsula to the other.. 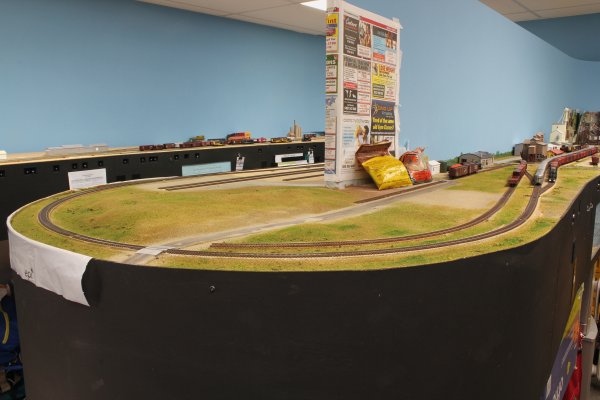 The plastic bags are sitting where Johnstone Engineering (Davis) will be located. The single ended siding in the foreground is the Davis stock yard track. The pens and chute will be located on the gravelled area, and stock-car bedding will be done near the end of the track.  The tracks on the far side of the peninsula are for the Kerr-McGee refinery at Wynnewood. (I need a couple of TrainCat models 40' tank car loading platforms for here, but they seem to be unavailable.)

This next photo shows that I've started construction of a hill that will separate Davis from Dougherty.  In reality, that part of the railroad winds through Oklahoma's Arbuckle mountains, and comes to the edge of the Washita River in a couple of places.  Unfortunately, I don't have room to model those scenic features, which is a great pity as I was really hoping to model "The Cut" south of Davis, due to its picturesque nature and its history. 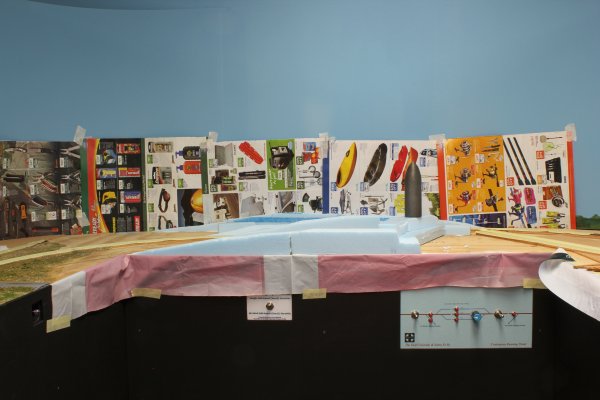 The cut-away section on the right is for the Southern Rock Asphalt quarry, which was actually located some distance from the rail line, but I've used my modeller's licence to relocate it close to town.

The small panel on the right of the fascia controls the hidden staging tracks that sit directly under the layout at this location.  When I rebuild the fascia for this section I will include CCTV monitoring of the staging yard tracks.

This last photo shows a small hill at the south end of Dougherty, which (once tree covered) will screen the view of the Dolese Bros. quarry at Big Canyon (on the other side of the peninsula).  If you look closely you can see the edge of the water pond at Big Canyon, in the background. 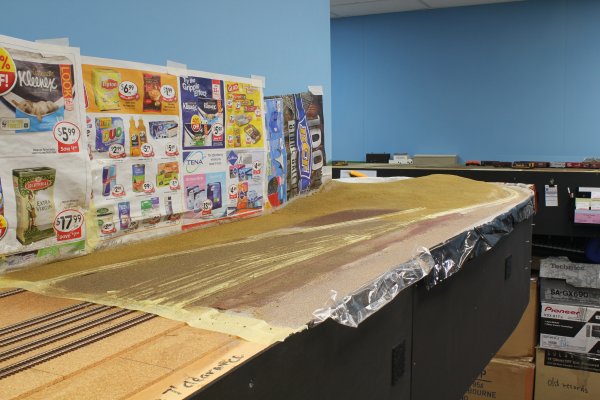 The masking tape across the tracks in the foreground is where I will locate a road.  The dark patch just right of centre will become a gravel area for loading/unloading cars on the team track.

Thanks for looking.
Ron

Email ThisBlogThis!Share to TwitterShare to FacebookShare to Pinterest
Labels: scenery

Building good scenery has never been one of my strong skills. That's partly because I'd rather be running trains than building scenery, and partly because I'm colour blind. The last time that I built any scenery was for my N-trak module, and the work had to be re-done because I had made the grass too bright. Or so I was told, but it looked fine to me :-)

With help from Rod and John F, my layout now has some scenery at Davis. There is still more work to be done, and the buildings need to be weathered, but even I have to admit that the improvement is enormous. So much so in fact that the organisers of the 13th National N Scale Convention have asked me for new photos to include on the Convention's layout tour page.

These are compressed versions of the images I'm offering. I wonder which will be accepted. 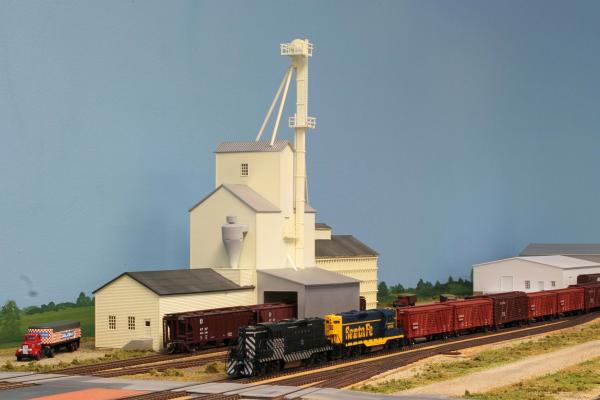 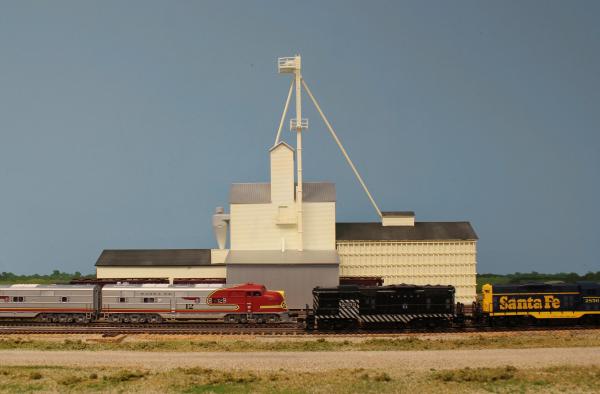 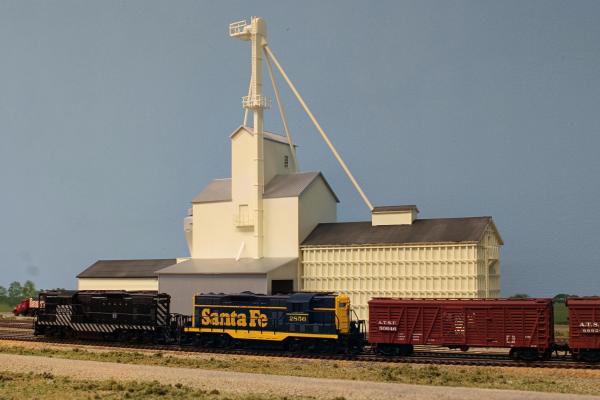 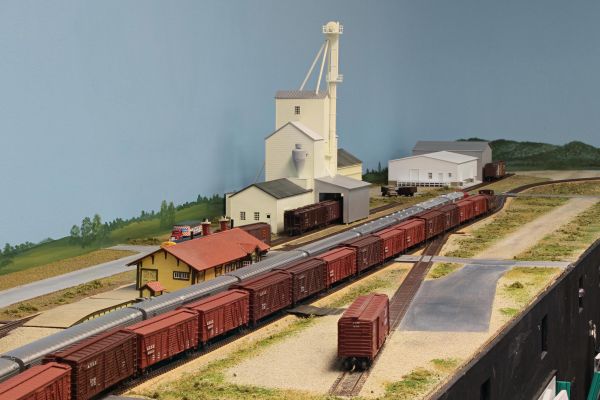 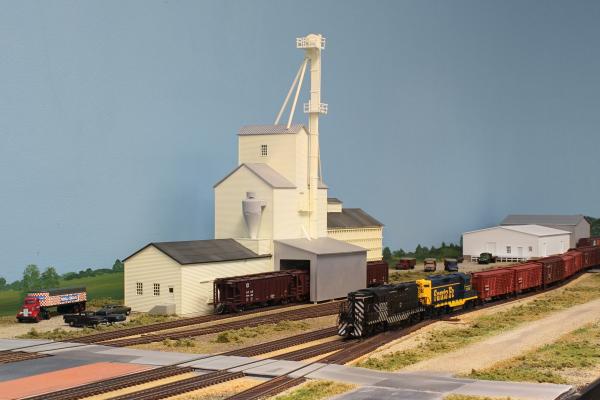 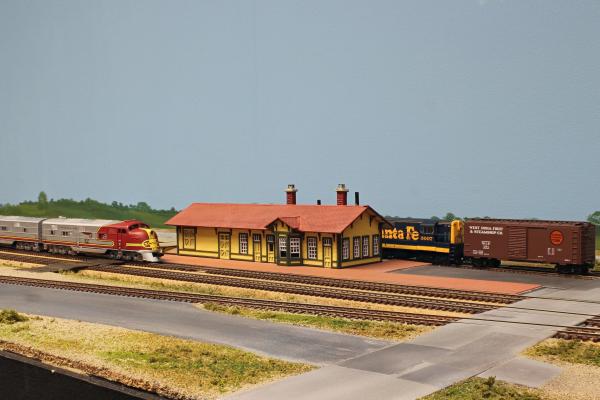 Wow!  Here it is, November already, and I didn't post anything during October. So much for my plan to have at least one post every month...

Anyway, last Friday was once again operating night on the GC&SF. In contrast to the September session when everything ran about as smoothly as one could ever expect, we seemed to have problems right from the start. As a consequence of resolving one problem after another, I didn't remember to take many photos. Luckily, Bethie's catering was up to its usual high standard. (Thanks Beth.)

So here are the best of the few photos that I remembered to take.

Here, Vic and Rod are running the northbound Ardmore local, and preparing to set out a cut of empty gondolas at Dolese Bros. quarry at Big Canyon. 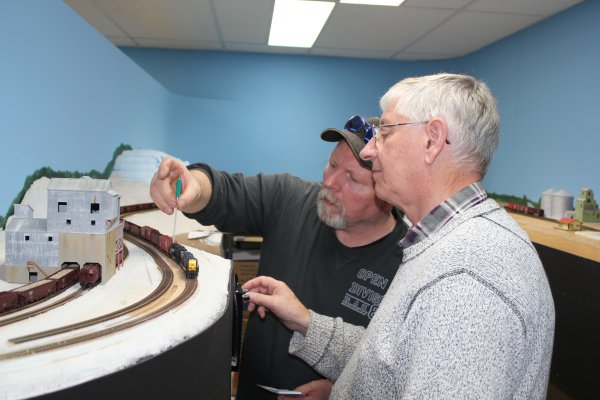 John F ran a southbound fast freight (train 37). In this photo he is doing his best to stay out of the photo, as his train passes through Davis. 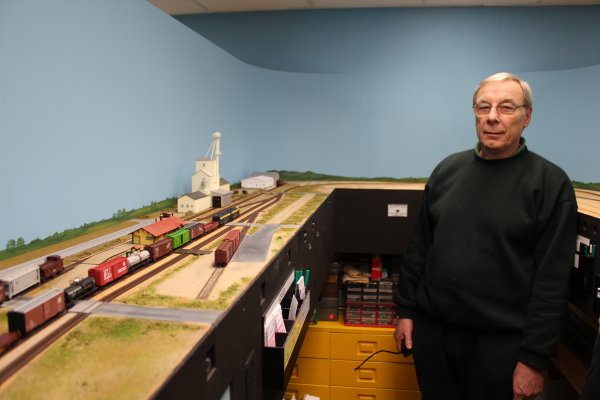 Noel and Dennis ran the Pauls Valley turn. Here's Noel driving the train as it leaves Davis heading towards Wynnewood. 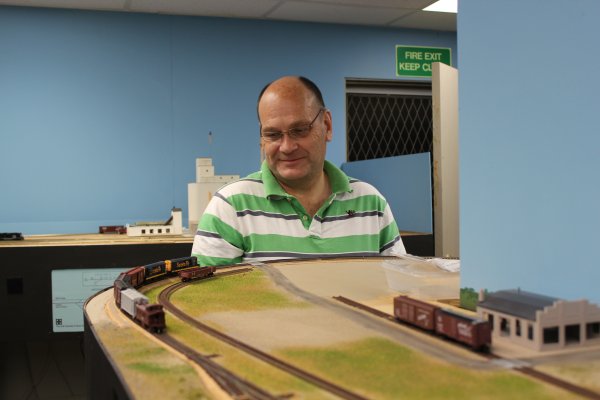 Here Barry is uncoupling cars from a northbound fast freight (train 38) at Ardmore. 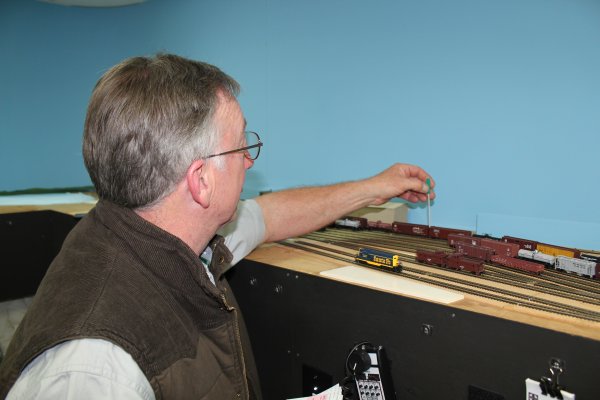 I'm sorry I don't have more pics from this session, but thanks for looking anyway.