Last Friday we finally held the first operating session on the GC&SF for 2013.  I was a bit concerned about how things would go in Dougherty, Davis and Wynnewood, where I've been doing some scenery work this year, but as far as I'm aware there were no problems at all. One turnout at Big Canyon did cause some electrical issues, and we had some derailments caused by wheelsets dropping out of trucks (odd, since the cars are not new) and one problem with a coupler trip pin on a new Atlas car. But otherwise, things seem to have run very well.

The guys did a great job of running the layout, and it's always very pleasing to see it running the way I've intended it to be run. Thanks guys!

Here are some photos that I took on the evening. I didn't check my camera settings before taking these photos, and the depth of field is not good.

JohnF and JohnC (Pauls Valley yard operator for the evening) at Pauls Valley. JohnF is waiting for his train to ascend the grade from north-end staging. 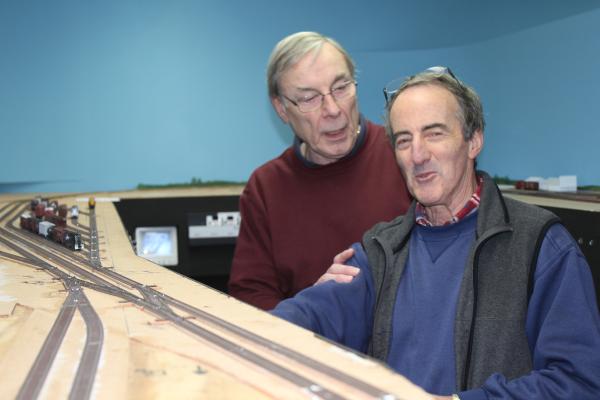 Here's Rod with the northbound passenger Train 6 at Wynnewood: 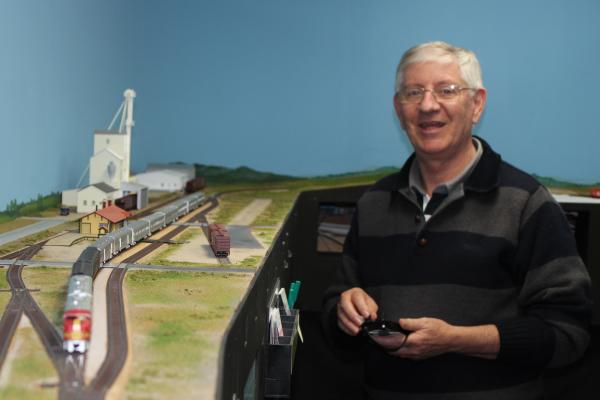 Train 6 is arriving at Pauls Valley, where southbound freight Train 37 operated by JohnF is being worked by yardmaster JohnC: 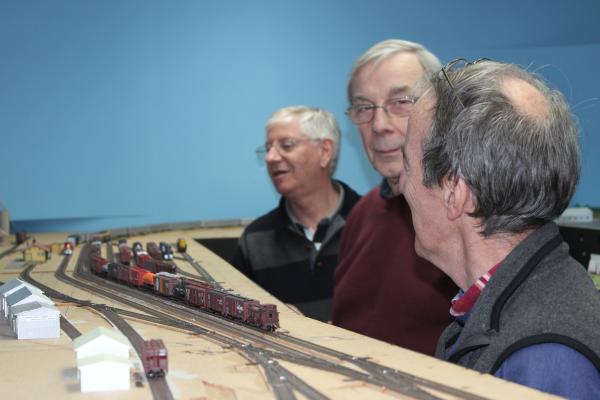 Over at Ardmore, yardmaster Brendan is removing cars from the Ardmore local freight, operated by Noel and Dennis (out of shot). Noel is selecting the car-cards he has to hand over to Brendan. 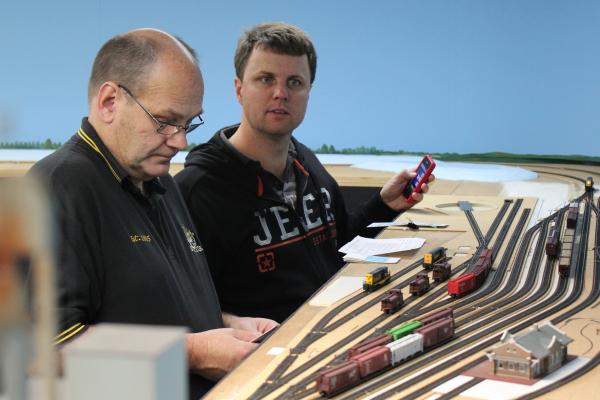 Brendan is using his iPhone to run locos using JMRI and WiThrottle.  The system also works with Android smart phones running Engine Driver.  If you have a spare wireless router and a smart phone it's a great addition to an existing DCC system (wireless or otherwise).

Here's another photo of action at Ardmore, which turned out to be the only picture that I took with Dennis in it. What is Dennis doing? 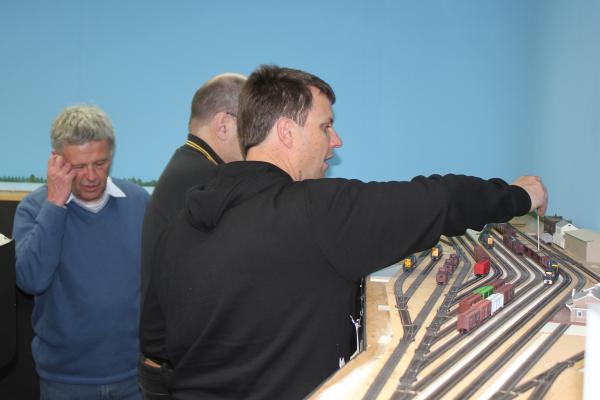 Greg ran the Pauls Valley local freight.  In this picture, the locos and caboose have just arrived on the house track, behind the depot. 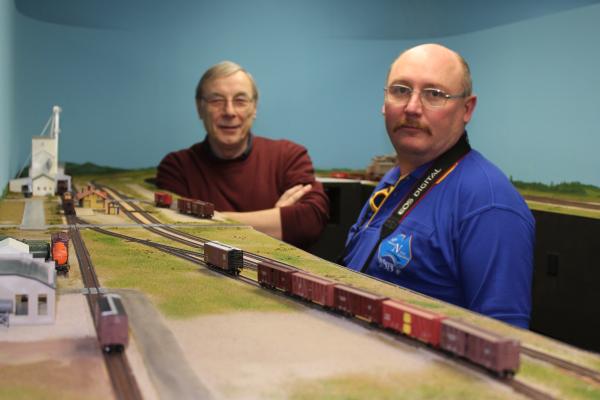 These photos taken by Greg show what can happen when a train's driver doesn't notice that a wheelset has come adrift from its truck: 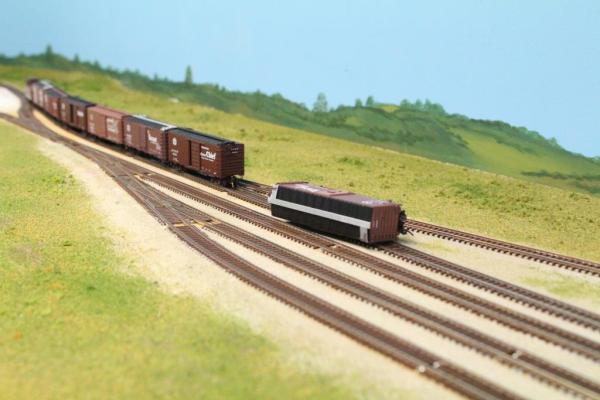 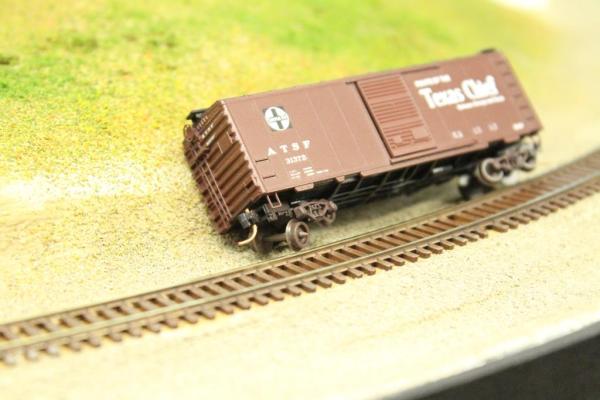 The guilty driver (that would be me) was ridiculed for his lack of attentiveness, in the time-honoured tradition: 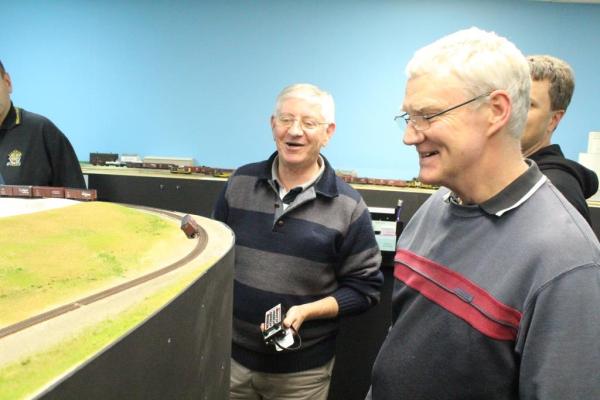 And over at Pauls Valley, someone forgot to realign a siding switch ahead of the northbound Kansas Cityan: 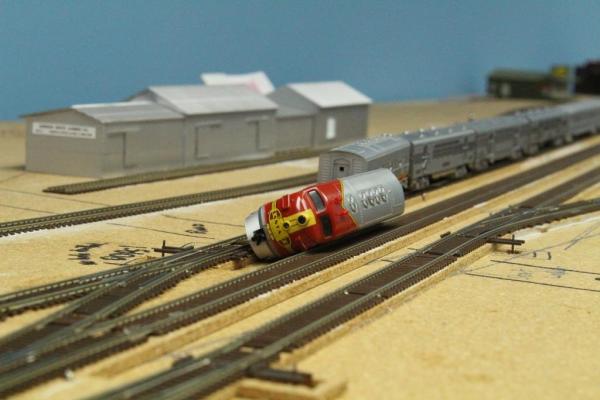 It looks like safety standards are slipping on the GC&SF!

Thanks for coming over guys, and thanks also for running the layout so well.

Well, I didn't achieve my goal of having the base scenery down at Wynnewood by the end of May, and with the next GC&SF operating session just a few days off I have packed away my tools and equipment so I can get the layout back to operating readiness.

These photos show what I did get done, and trust me when I say that many hours of work went into getting this done! The first picture shows that I have installed the main roads and the brick and concrete bases for the depot and various industries. The large pads in the foreground are for the Kerr McGee refinery. I've also marked out where some secondary roads will go, but not yet built them. 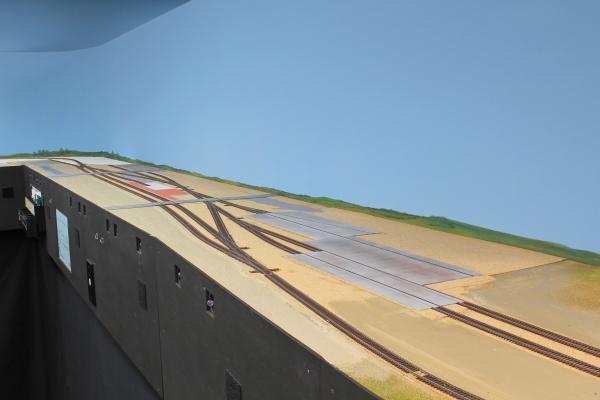 This photo shows how the town looks with the (mostly unpainted) buildings in place, and cars spotted. 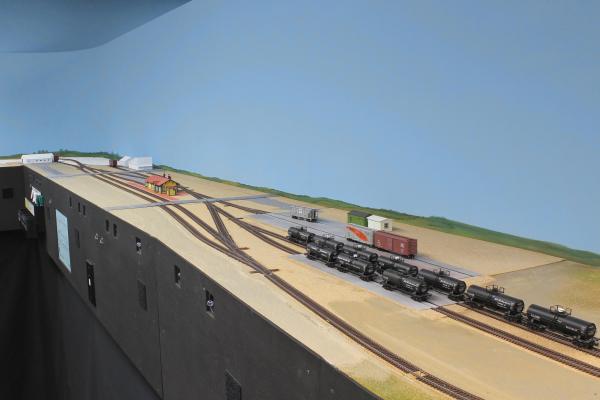 I want to install two or three of TrainCat's  tank car loading platforms on the concrete pad between the two rows of tank cars, if they ever again become available.