As I mentioned in my previous post, I invited a crew over to run trains last Tuesday (28 March 2017).  From my perspective, the day went very well and I believe that everybody had a great time.  Two of the operators, Chris and Peter, were new to both the GC&SF and CC&WB operation (apart from one session that Chris had on Brendan's layout.)

I had my camera handy to help me tell the story. Chris also brought his camera along, and many of the photos presented below were taken by him. Thanks Chris!

Chris captured the trains lined up in South Staging prior to the start of the session: 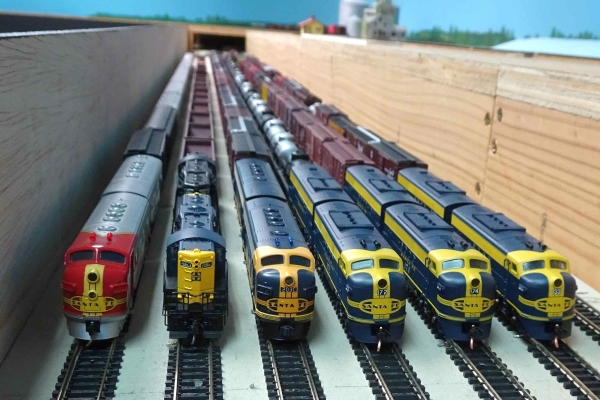 The baggage car behind the locos in the passenger train on track 1 ("The Chicagoan") is off the track, and that was corrected before the session started. The other trains, from left to right, are a gravel train, a load of empty box cars headed to Kansas for grain loading, a tank car train which will switch cars at the Wynnewood refinery, and two through freights (Trains 38 and 40.)

Here's Chris waiting for his train (the northbound Chicagoan) to emerge from the hidden south staging yard: 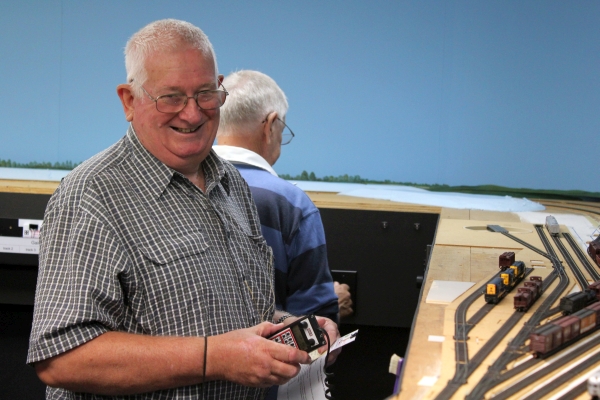 At the other end of the layout, first-time visitor Peter is giving John a hand at running the Pauls Valley yard. 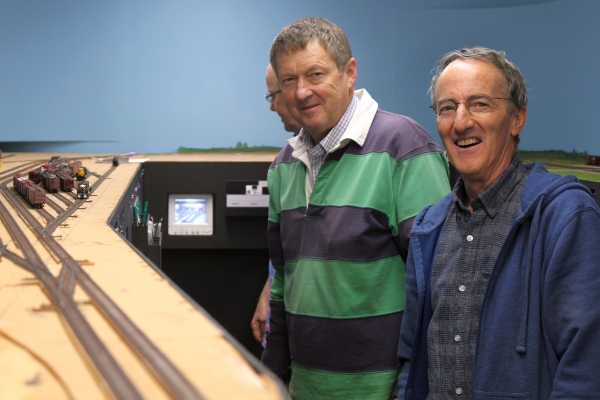 Bill is at Davis, collecting cars for the Pauls Valley local freight: 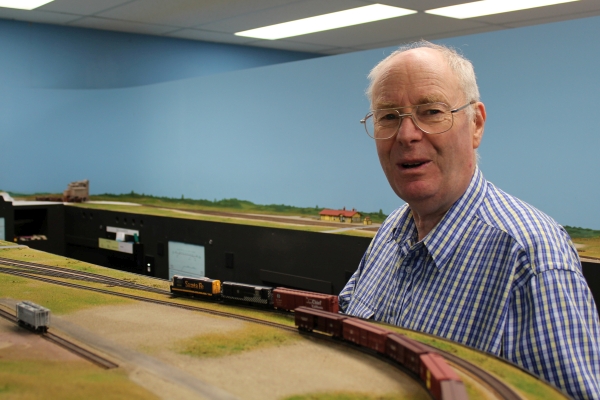 I recently changed the way I switch the quarries at Dougherty and Big Canyon to more accurately represent the way my friend Rip-Rap described the operations to me (here.)  Rod and Vic teamed up to run the northbound gravel travel, and in these photos they are delivering a cut of empty gons to the Dolese Bros. Quarry at Big Canyon. They'll pick up the loaded cars on their return (southbound) journey. 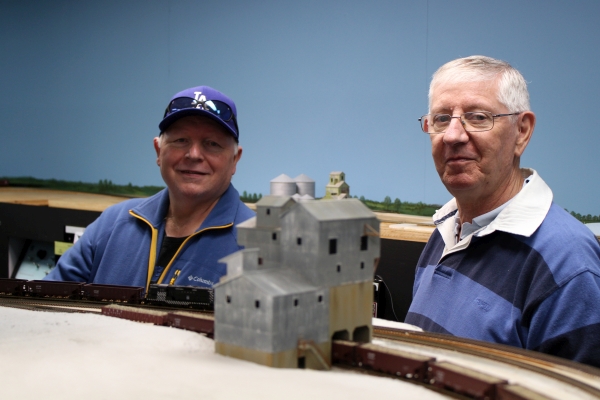 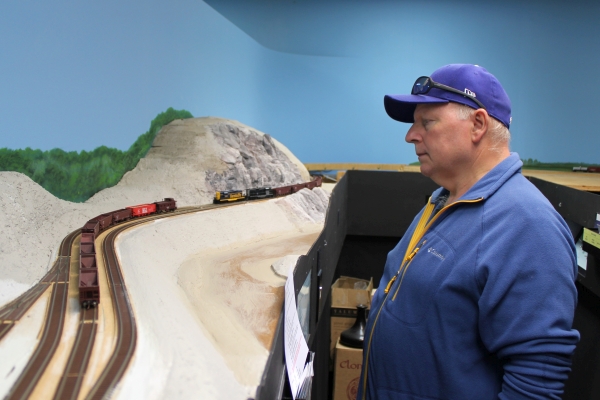 Graham is running a southbound fast freight (Train 39) through Davis while Bill waits for him to pass. 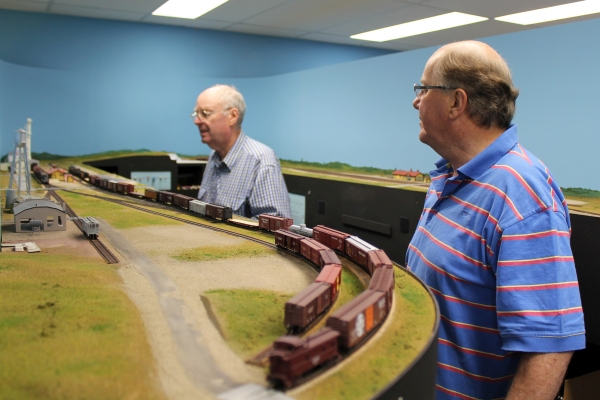 Vic and Rod have placed the gravel train onto the sidings so Train 39 can pass.  Nice work, guys. 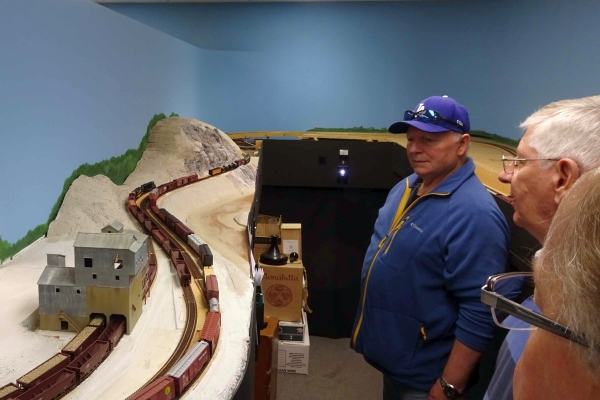 Bill is switching Wynnewood with the Pauls Valley local: 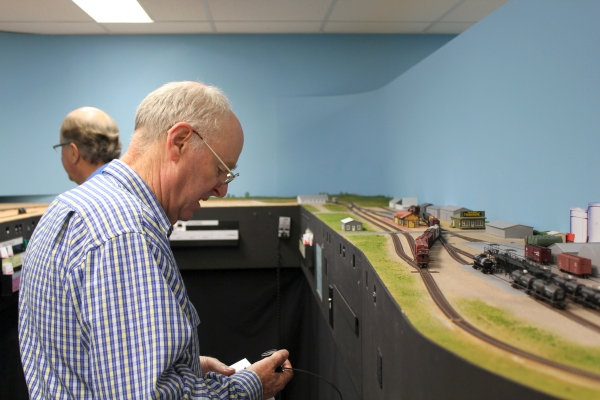 Chris has returned to Ardmore with the local freight: 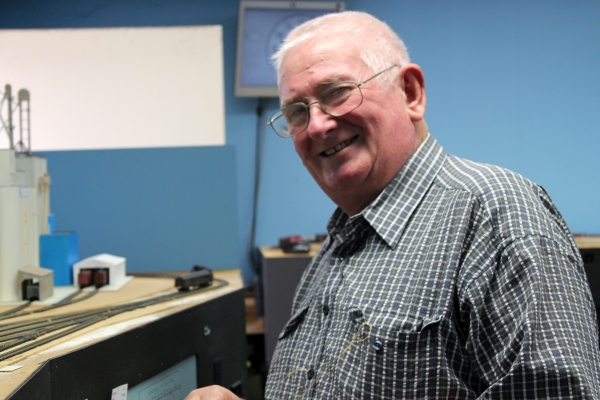 Peter ran the northbound refinery train, which switches tank cars at the Wynnewood refinery. Here, Bill is helping him sort out what work has to be done: 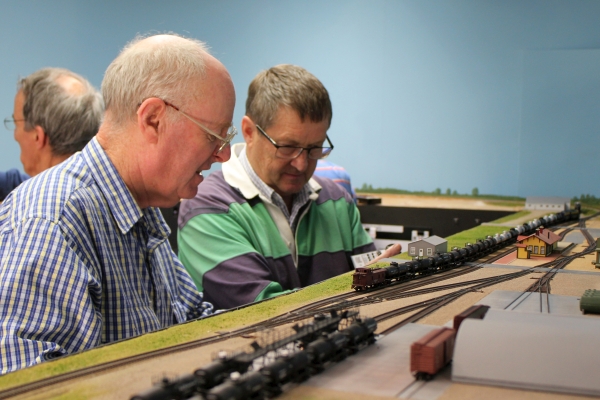 Before Peter can start the switching he has to wait for the southbound livestock train to pass through Wynnewood. Rod is keeping a close eye on the clearance, as the refinery train is a tight fit on the siding. 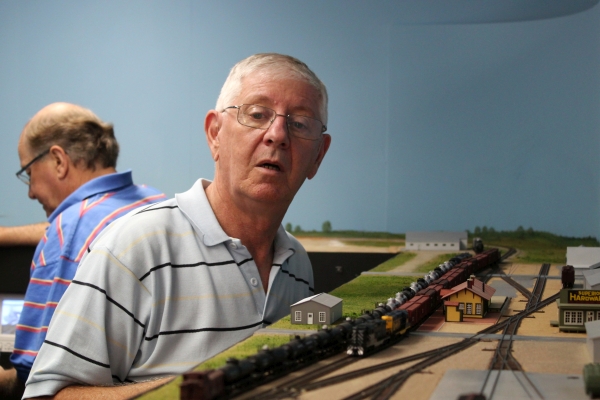 The following photos taken by Chris show some of the industries on the layout.

South staging yards, about half-way through the session. The trains with the locos in the foreground have been run, while those with a caboose in the foreground have yet to leave. The cabooses are all Atlas offset cupola cabooses that I've added MTL end handrails and chimneys to. I'm still awaiting the day that somebody (I'm looking at you, Atlas) produces a better model of these Santa Fe waycars that is appropriate for the '50s. 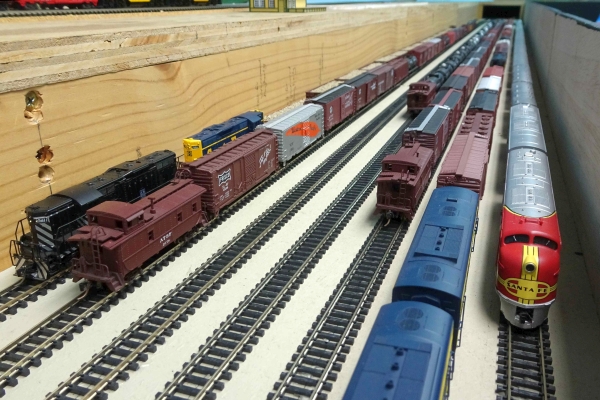 Two shots of Ardmore. First, the yard service tracks, and then the Bluebonnet Feed Mill (built for me by Rod.) 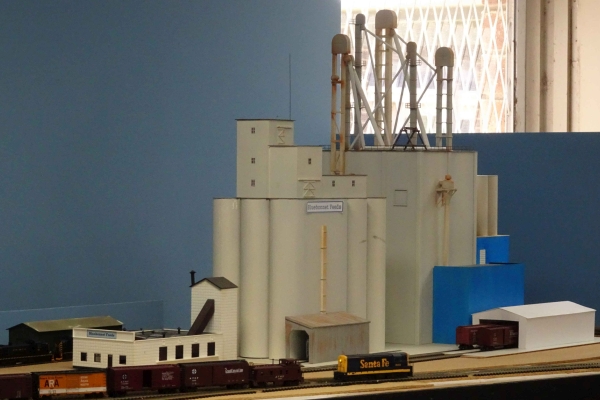 Rod's model of Bluebonnet Feedmill dominates the scene at Ardmore, just like the real thing does.

Some shots of Gene Autry. This area is soon to be torn up and rebuilt so that I can expand the industrial trackage at my representation of the Ardmore Airpark (formerly the Ardmore Airbase). 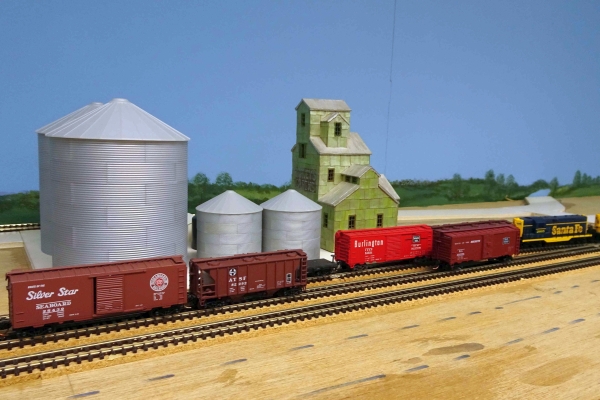 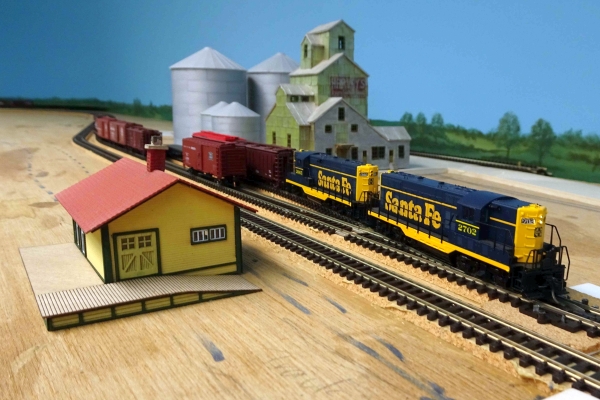 This is Big Canyon, with the Dolese Bros. quarry in the distance. The next picture was taken a few hundred meters south of the area represented in the previous layout photo, and shows the look that I want for my representation of Big Canyon. The quarry plant was located just to the left of the large hill that overlooks the tracks in the centre-left, behind the building. I've had this photo for a long time, but only just noticed that building, which is probably a GC&SF structure.  Unfortunately, the person who would have been able to tell me has recently passed away. 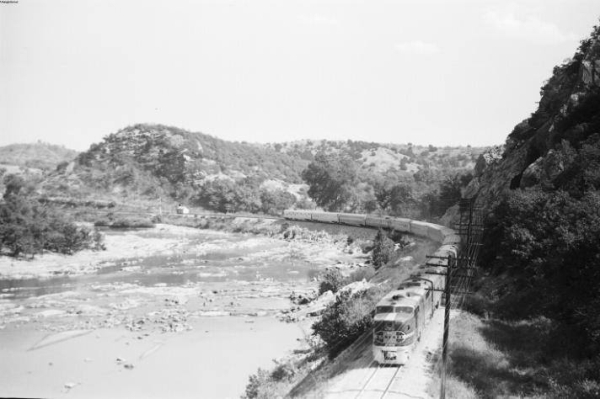 This is my model of the Southern Rock Asphalt plant at Dougherty. 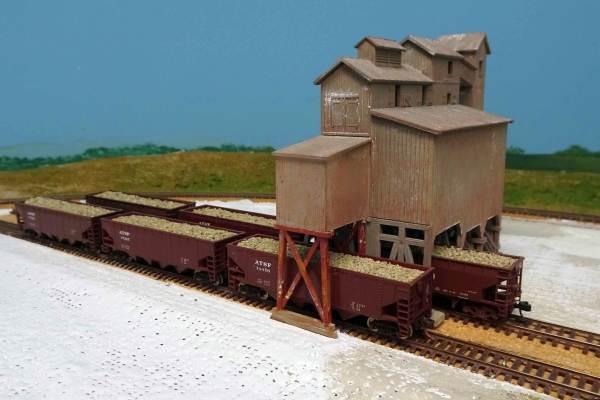 My Southern Rock Asphalt plant represents one of two quarries that were located on a long spur that ran north from Dougherty. At one time, one of the quarries had its own steam engine that moved cars between both quarries and the GC&SF at Dougherty. Both of these pictures are said to be of the Southern Rock plant, so I assume that the first (referred to as the "new plant") replaced the facility shown in the second photo. 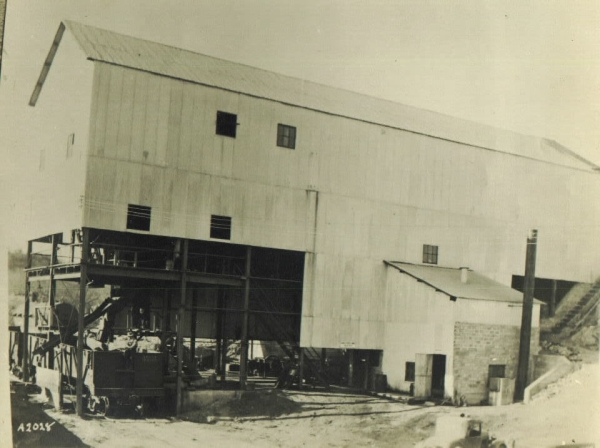 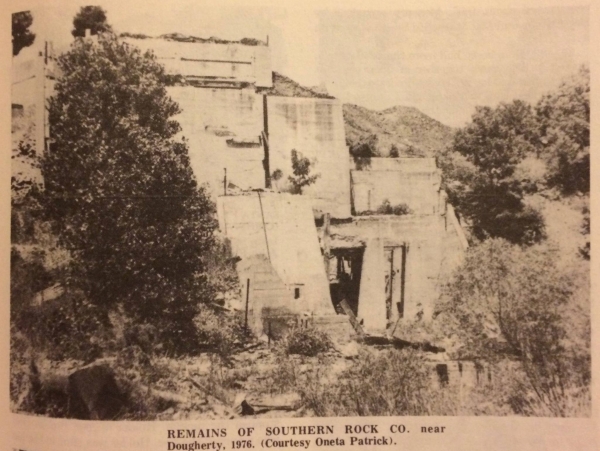 This is the depot at Davis, with Johnstone Construction and Pitmon Oil in the background. Both industries are fictitious. 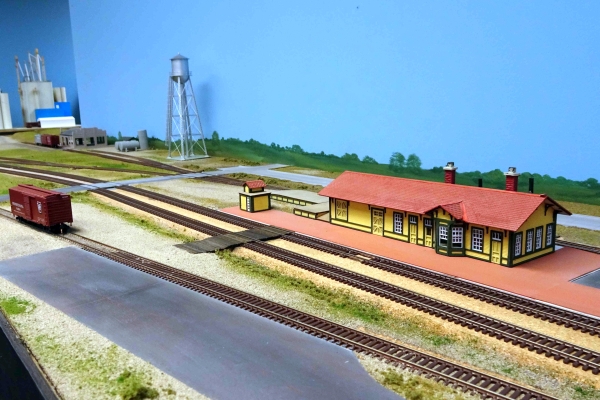 This is Arctic Processing, at Davis. I created this fictitious industry because I wanted somewhere on the layout to ship reefers to. 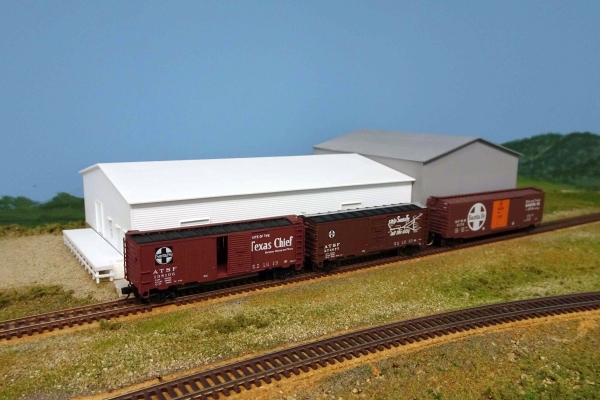 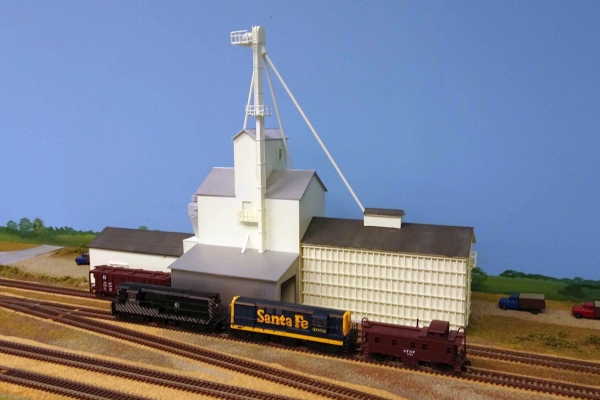 This is Kerr McGee Oil Refinery at Wynnewood. There has been a refinery at the south end of Wynnewood for a very long time. I'm not trying to represent the entire plant; just an LPG tank car loading area (for outbound shipments of LPG) along with some large storage sheds (inbound materials). 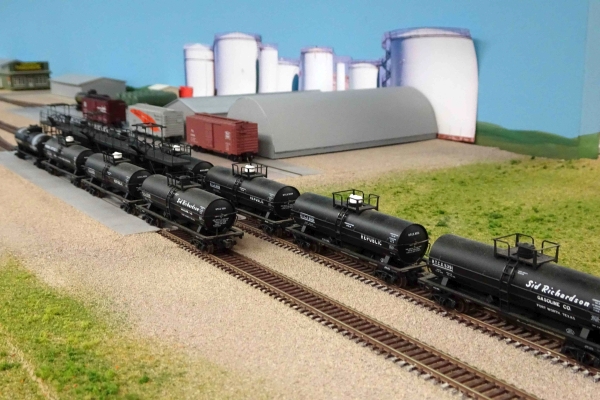 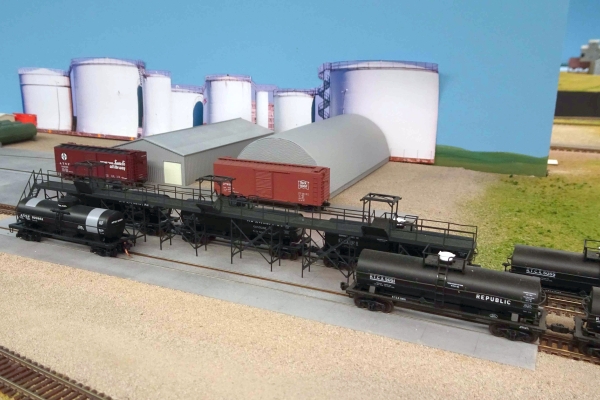 Judging by the feedback I've received since Tuesday, the guys had a good time, and I know I enjoyed the day as well. Thanks for coming over guys. And thanks again for the photos, Chris.

Thanks for following along.

I've invited a crew over for another operating session next Tuesday (28th March.)  It will probably be the last session I have for a few months (until May, at least) as I want to pull up the track at Gene Autry and re-lay it to provide better switching opportunities at the Ardmore Air Base.

I usually have trouble getting a crew together for week-day sessions because half the guys who come on Friday nights still have to work for a living.  Next Tuesday is no exception, so I've invited a couple of gents who've not operated on the GC before.  One of them has never tried CC&WB operation at all, and the other has had one session (we operated together on the last session of Brendan's previous D&H layout.)

This is the crew call board that we'll be operating under: 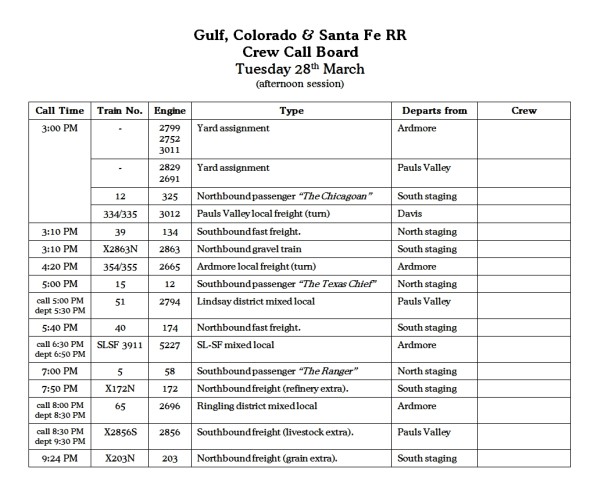 As with the previous session, I've now included the branch line trains that were previously run by the yard operators in the list of trains to be run by the general pool of operators. I've also prepared new and amended instructions for the trains that are affected by this change.


Since the last session I've finally fixed a problem that has annoyed me for quite some time. After converting the layout to DCC I decided to use car lamps combined with PTC fuses for short circuit protection.The plan was to have one of these devices installed to protect each town, so that a short circuit wouldn't shut down the entire layout.

Sadly, when I originally rewired the layout for DCC I got lazy as far as the hidden track that allowed continuous running is concerned.  The electrical blocks for that track are very long, and each has several sets of droppers (power feeds). Instead of running the power feeds all back to a single aggregation point, I simply connected them up to the nearest town's aggregation point. Consequently, power districts that were supposed to be isolated from each other were actually electically connected, and some short circuits could still shut down most if not all of the layout.

After several hours of crawling around under the layout I think that I've now sorted out the wiring, and that the short circuit protection will now work as intended. The big test will be on Tuesday.