New (sort of) 'puter for the layout

The old laptop that I've been using to run JMRI/DecoderPro and Stan's Fast Clock has been giving me a bit of grief whenever I try to operate JMRI WiThrottle server. The network between the laptop and the wireless router kept dropping out for no reason that we could identify.

So yesterday I installed an old desk-top PC and monitor in place of the lappie. I installed DecoderPro and added my loco roster, so you can select the loco you want to use from the list provided on the smart-phone: 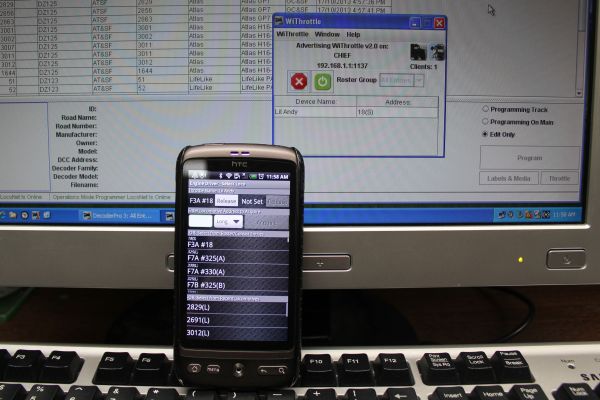 To be honest though, I think that it will probably be quicker to just enter the loco number than to scroll through the list of nearly 50 locomotives for the one you're after.

Greg and Brendan will no doubt be pleased that I have this sorted now, as they sometimes use their smart-phones as throttles.

Here are some photos that I took at last Friday night's operating session on the GC&SF.  Unfortunately, I didn't get photos of everbody who attended, and I apologise to those that I missed.

First off, this is the starting line-up in the south staging yard. The GP7s are Atlas, the E6s and PAs are Lifelike, and the FTs are Micro-Trains.  The track on the far right is the hidden continuous run connection between Ardmore and Pauls Valley. It doesn't get used during operating sessions. 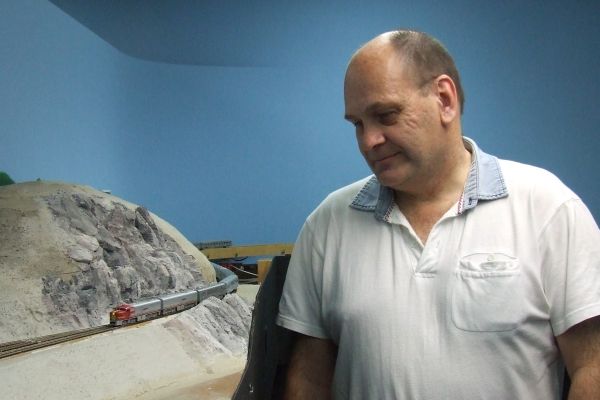 Brendan is collecting cars at Davis for the morning run to Pauls Valley: 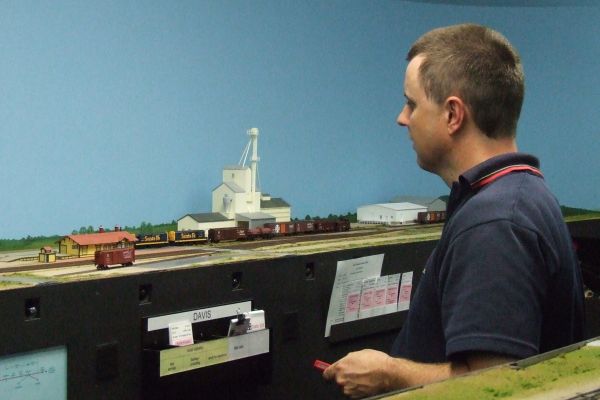 It's good to see the car-card sorting shelves being used as I intended. 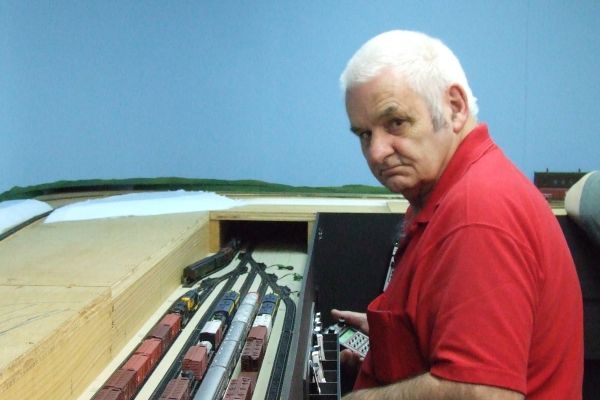 Vic and Greg ran the yard at Ardmore. Here's Vic, but I didn't get a photo of Greg 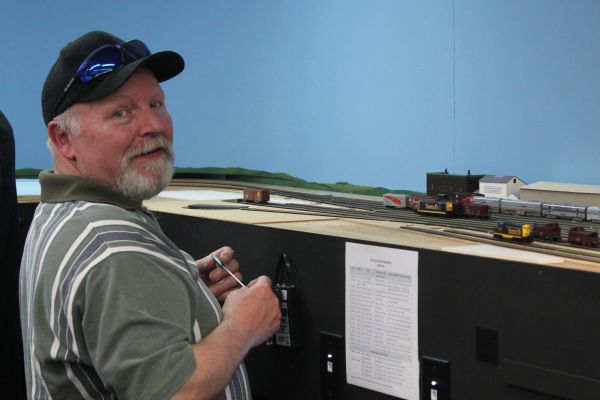 Here's Charlie again, demonstrating what happens when you don't look ahead. He's just discovered that there's already a train sitting on the main at Gene Autry.  (No, that's NOT a mid-train BAAB loco set.) 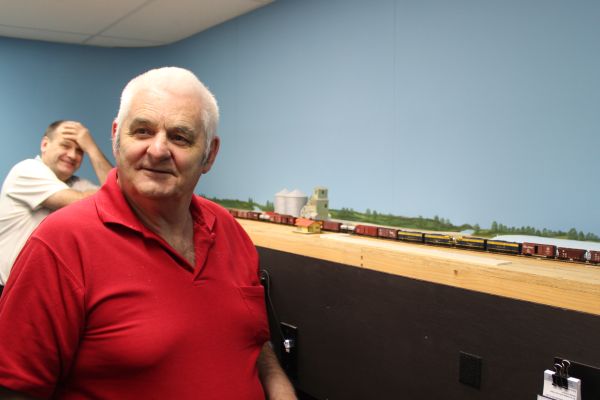 He was a much happier fellow by the time his train passed Big Canyon quarry: 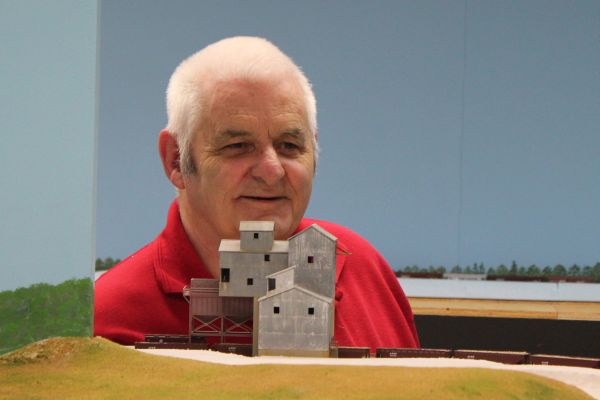 I believe that the crusher kit (Walther's Glacier Gravel) is based on the actual Dolese Bros. structure at Big Canyon. I have some TrainCat conveyors on order to add to this scene.

This is Darren bringing the Ardmore local freight into Dougherty: 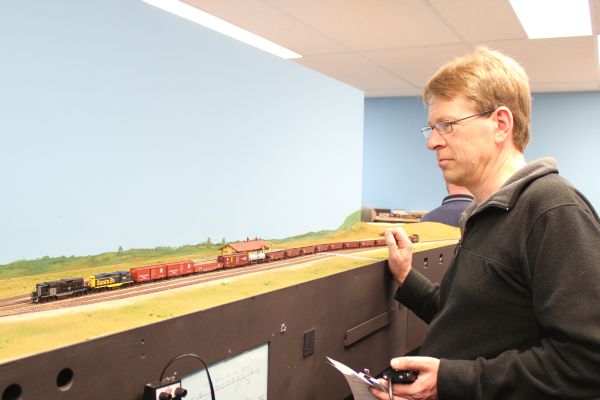 Left to right, Noel, John F, Brendan (background) and John C at Ardmore.  John F is operating the southbound through freight that is visible in the distance. John C is running Pauls Valley. 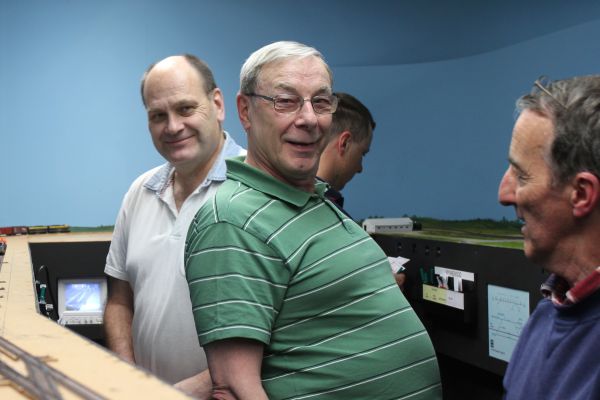 John F's through freight is passing through Big Canyon, while Darren's local freight crew waits on the siding for the main track to become available for switching. 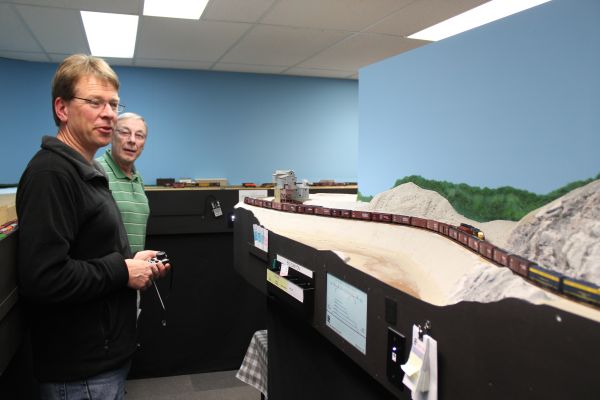 That's it for this session. Thanks for looking.