This afternoon I finished laying the track at the north end of the Gene Autry siding, including the revised siding arrangement for the airpark. I couldn't arrange the track exactly as I wanted to, because I had to work around  the holes I had originally cut in the baseboard in order to mount Peco point motors under the turnouts. However, this arrangement allowed me to provide more separation between the airpark sidings and the main track, and also to maximise their length. The airpark sidings can now hold eleven 40' cars (up from four), although I don't intend to operate it to full capacity.

Here's how it turned out. The short length of track in the foreground indicates where the main siding will be located. 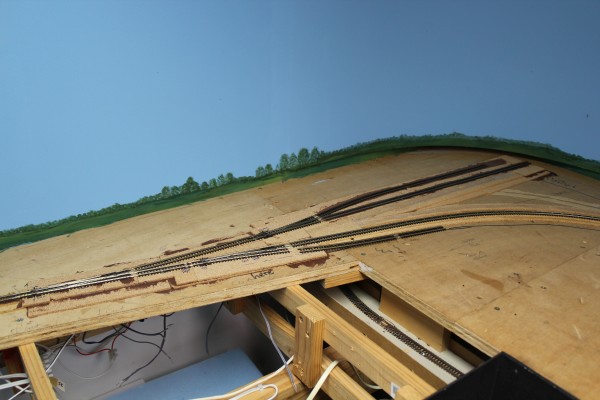 I envisage a row of storage sheds behind the shorter (rear) siding, which will be used for unloading boxcars. The longer (front) track will be for unloading tank cars (eg aviation fuel.) The short length of track in the foreground indicates where the main siding will be located.

The wires hanging down are the power feeders (droppers) which have been soldered to the underside of the rail, but have not yet been connected to the track power.  Also, I still have to build and install the push-rod mechanisms to operate the three turnouts.

Next step will be to install a new turnout on the main for the south end of the mainline siding. I will probably wait until all the trackwork is finished before completing the wiring and installing the pushrods.

Thanks for looking,
Ron

When I laid the track for Gene Autry (way back in the early '90s) the only information I had on the town was from Andy Sperandeo's 1980's "Washita & Santa Fe" series in Model Railroader magazine. The series included a track plan showing the township to have a double-ended passing siding, and a single ended siding serving a grain elevator and a stock pen. (Andy's compressed arrangement was plausibly accurate for Gene Autry at the time the article was published.)

As a CC&WB 'operator', I've come to dislike single ended sidings serving multiple busy industries. They may be fine in real life, when each industry only receives or ship a car or two every once in a while. But I was wanting industries that would receive/ship multiple cars every operating session, and I didn't want the operators tying up the main track with strings of cars every time they switched Gene Autry. So I built my version of Gene Autry with a double-ended industry siding coming off the passing siding. I've since confirmed that in the '50s the industry siding was indeed double ended, although it ran off the main track rather than the passing siding.

Ardmore Air Force Base => Ardmore Industrial Airpark
(Click here for information about the air force base and its history.)

I've been aware of the airbase/airpark for a long time, but for some crazy reason I originally believed that it was located somewhere near Ardmore. Silly me! In fact, it is actually located just north of the town of Gene Autry, and was originally served by a rail siding that left the main just south of the passing siding's north switch. There's almost nothing left of the original siding these days, but back in the day it had a respectable group of tracks, as shown in this 1965 map from Historic Aerials:


Once I discovered the location of the airpark I wasted no time in extending my passing siding at Gene Autry, and adding a short stub siding to represent it. However, I only had room for a short track that is barely capable of handling the traffic that I want to send to it.

The following photo shows the track arrangement. The front track is the main, then the passing siding, and the stub siding is the airpark siding. (This photo was taken after I had started work on the remodelling, but the points are in their original positions.)

Over the years I've learned a lot about Gene Autry (thanks in no small part to my friend Doug Williams who was born and raised there, and has written a book on his memories.) I now niggles me that my depot sits alongside the siding instead of alongside the main track (where it should be); and that my industry siding does not run around behind the depot (again, as the prototype did.) Most of all though, I want to increase the capacity of the sidings at my Airpark to better reflect that busy location. So today I started work on rearranging the track in order to address those matters.

The plan has three objectives:
I also wanted to move the main track closer to the aisle to provide more room for the airpark. However, I want to install Peco motors under the points, and the trackwork and timber located underneath the baseboard in this area severely limited where I could place points for the airpark sidings.
Edit (the next day):  It finally dawned on me that if I use Peco motors on these points then I'll probably have to also use either a Peco PL13 or PL15 to power the frogs. In my opinion, both devices are somewhat clunky, possibly unreliable, and certainly quite expensive. After further study, I've decided to operate these points with pushrods. Due to the thicker plywood baseboard (18mm instead of 12mm used elsewhere) the 'reach' from the slide switch to the throw-bar is longer than I've used elsewhere but I think I can work around that. Using pushrods completely rules out relocating the airpark sidings as I previously wanted, but with a bit of re-engineering the revised sidings will hold at least 6 cars each, which will give me nearly triple the capacity of the old siding.

My plan is to have this rework completed by the end of April as I want to host an operating schedule in mid-May.