I finally painted my LPG/propane loading platforms grimy black, and when I positioned them to see how they'd look I got to thinking about the rest of the refinery scene.

Back in this post I included a photo that indicated that I'll be including some large storage tanks in the area behind the refinery's LPG/propane loading platforms. However, after looking at photos I'm not sure that having large bulk storage tanks is the right way to proceed.

This 1951 photo of the refinery shows a string of (unpressurised?) tank cars at a loading rack, possibly bringing in crude oil. The LPG loading platform had not yet been built. 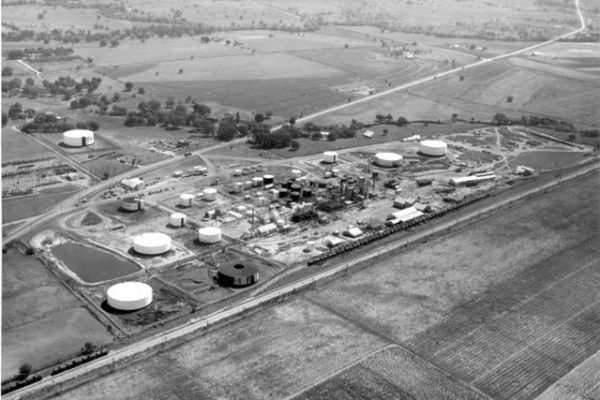 Unfortunately I don't know when the second platform was built

This is a closer view of the newer platform and its surroundings: 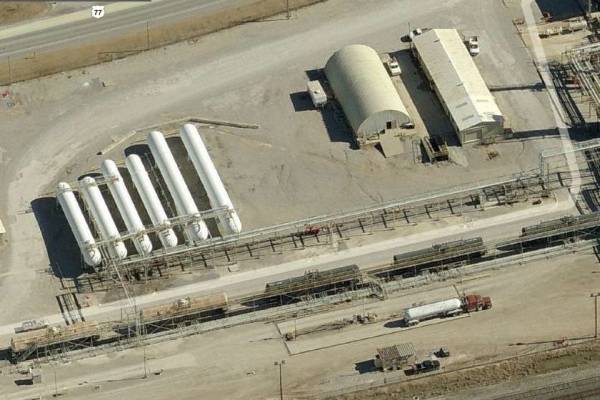 Neither photo shows large storage tanks near the loading platforms.  I'm not sure whether those long cylindrical tanks were around in 1960, but those two huts (one of which seems to be a 40' x 100' quonset warehouse hut from WW2) might well have been. As the two tracks closest to my backdrop are for receiving inbound shipments, having a couple of warehouses nearby makes a lot of sense.  So I've been doing some experimenting with mock-ups of these buildings to see how they might fit into my scene.

So, after all that preamble, here is what I'm now considering: 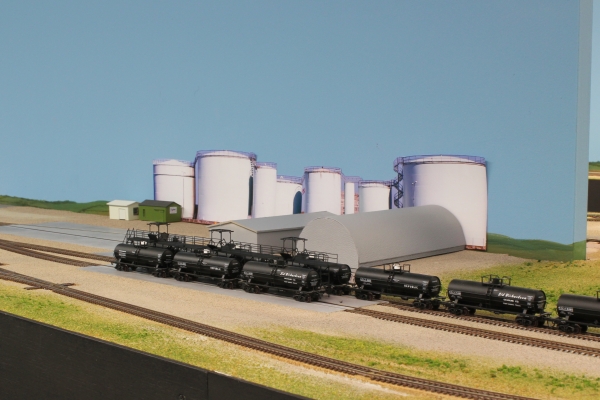 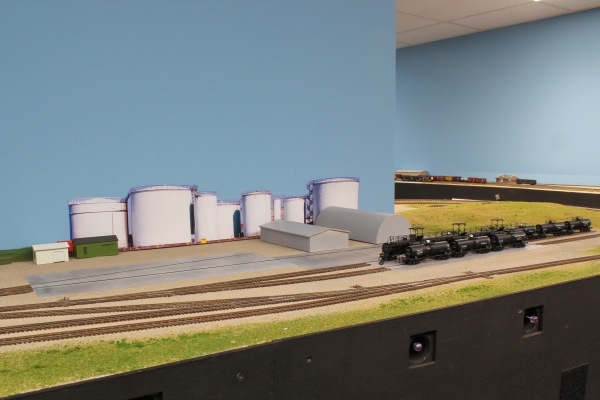 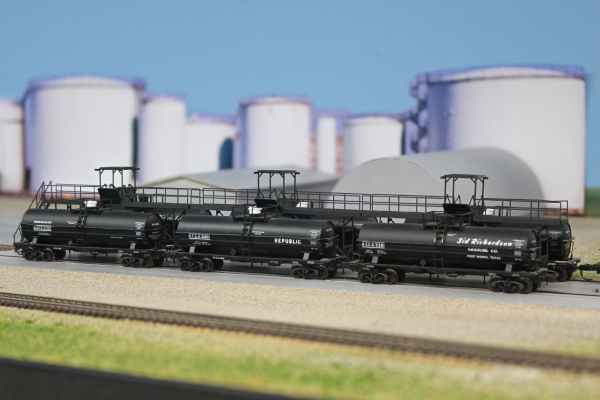 What do you think? Storage tanks or sheds? Personally, I like the sheds even though I'll have to compress them a little.

The crew got together last Friday night for the first GC&SF operating session for 2014.  We had a big crew, with everyone except Barry (who's on holidays) coming along. It was a warm night, so we sat outside for "show-and-tell" before starting the session. All in all, the session went very well, although not without a few annoying problems most of which stemmed from oversights on my part. The guys have learnt to operate the layout very well and with minimal intervention from the roving dispatcher (that would be me).

We started the schedule with the 'afternoon' half of my operating timetable (from 3:00pm to midnight), but as things went so well, when we got to the end we kicked over to the 'morning' section (6:00am to 2:59pm). Here are some photos of the action.


In this photo, the two Johns are obviously having too much fun. But at least Vic is earning his pay: 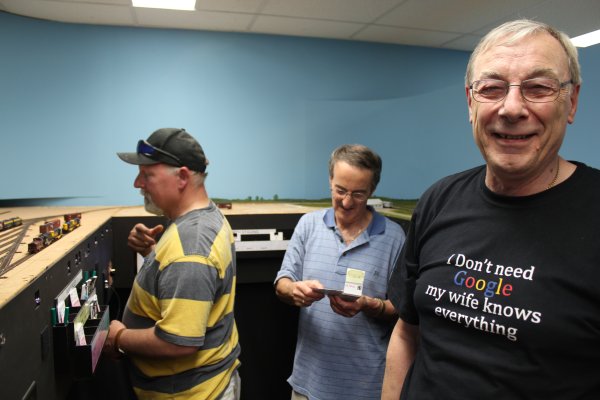 I bet John F had another T-shirt to change into before he got home.

Vic's south-bound train has reached Ardmore, and is meeting a northbound freight operated by Charlie.  Brendan operated the yard at Ardmore using WiThrottle on his iPhone. 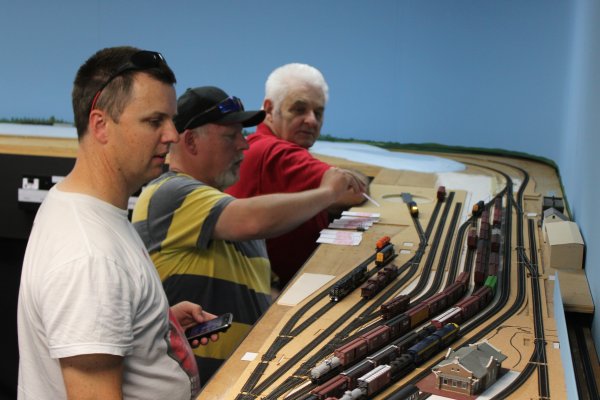 Errm ... there's something wrong with this, guys - these two trains aren't supposed to cross at Ardmore.

Greg and Rod ran the afternoon Gainesville/Ardmore local freight. Here they are finalising their moves at Dougherty before returning to the south: 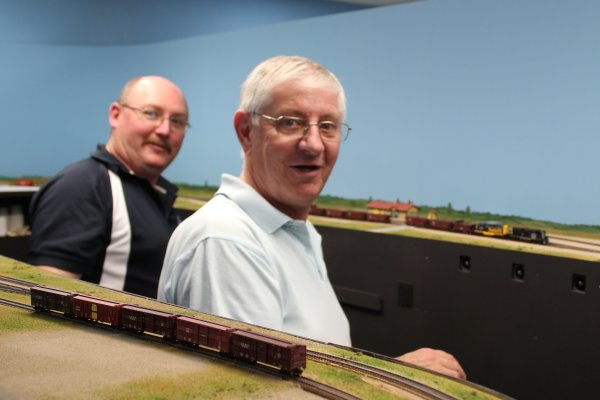 John C (operator at Pauls Valley) and Bill are confering about a train that Bill is about to operate: 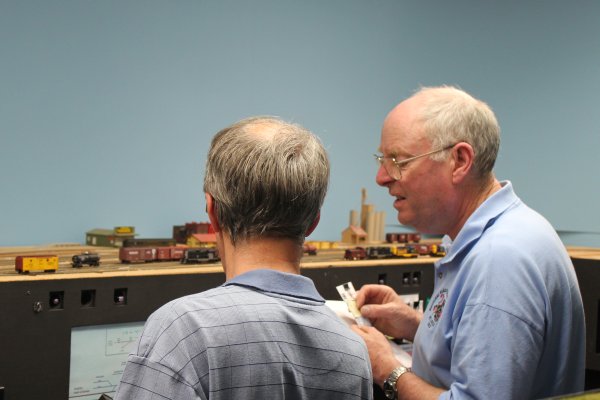 Dennis ran the Pauls Valley - Davis local, and is switching the Kerr McGee refinery at Wynnewood in this photo.  In the background, Noel is waiting for the scheduled departure time for his train (a southbound livestock extra). 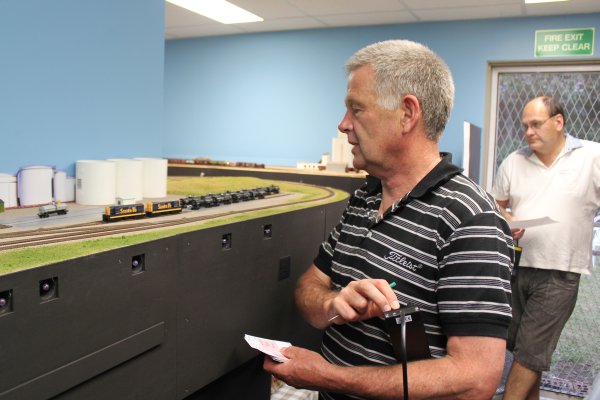 Bill is driving the southbound "Ranger" at Wynnewood. 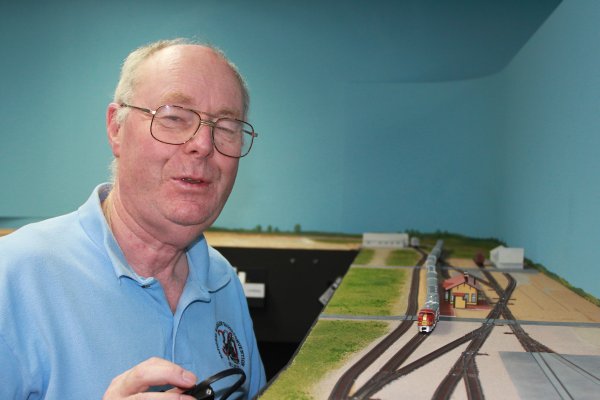 In this photo, Bill and Rod have teamed up to run the SLSF mixed local from Hugo to Ardmore. 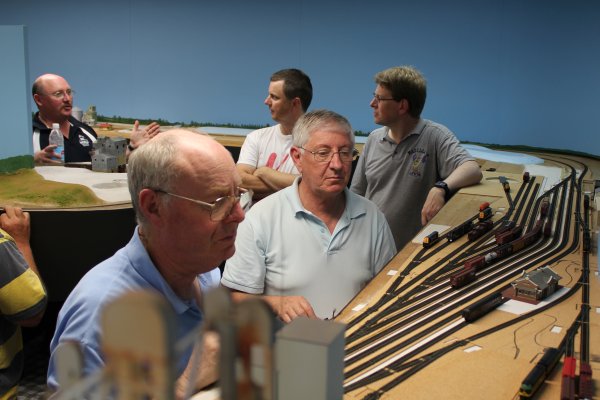 Greg, Brendan and Darren are in the background.

Later in the evening we had completed the 'afternoon' half of my operating timetable, and as things were going so well we advanced to the 'morning' session.  One of the nice things about CC&WB operation is that you can do this with almost no preparation. 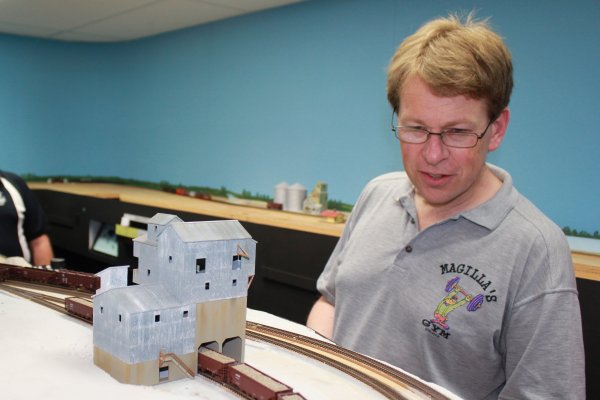 For quite some time now I've been receiving nagging emails from Vistaprint inviting me to buy some of their promotional products.  I finally cracked a few weeks back, and bought some mugs with my Gulflines emblem printed on them.  They turned out a lot nicer than I was expecting.  In this photo our two lovely models are demonstrating the mug... 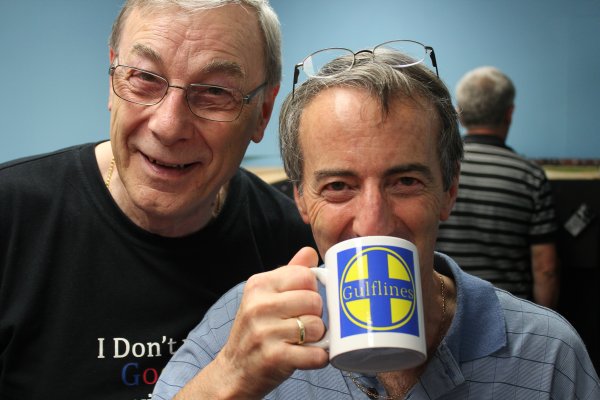 Thanks for coming over guys. I had a great night, and I hope you did as well.