Turnout pushrods on the GC&SF

Like many people, I use small slide switches to lock the turnout throwbar in position, and to power the frog on the turnout. My switches are mounted under the layout, and operated using a wire push-rod that extends to the layout fascia. Hopefully, this series of photos will show how I make mine.

First I drill two holes in the switch knob. One tightly holds a short length of piano wire, that will pass through a hole in the baseboard, to slide the turnout throwbar. The second hole is larger, and loosely secures the push-rod wire. The wire I use is just under 2mm in diameter, and I get it from a hardware store.

Once the switch is prepared, I glue it to a small piece of wood that will be attached under the layout by a couple of screws. 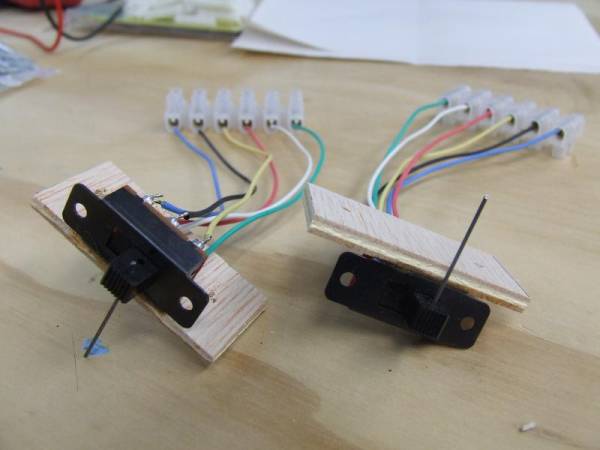 See also the update below for a better photo and more information onmaking these assemblies.

The photo shows that I have also soldered wires to the slide switch, and terminated them in a block of screw terminals. Three of the wires are used to power the turnout frog, and the other three are there just in case I ever decide to add signaling.

Once the assembly is built I add the push-rod wire, feed the push-rod through a hole in the fascia panel, and then install the switch assembly under the turnout. 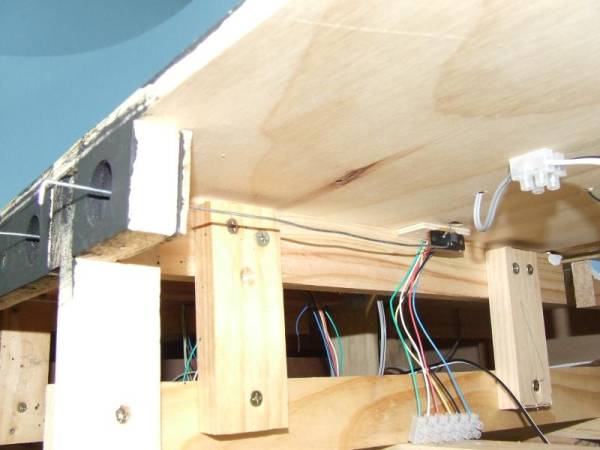 This stage is pretty fiddly as you must get the switch assembly in the right place (where it operates the turnout in a smooth and reliable manner), then hold it in place while you screw it into position. It helps to have a third hand, or someone to assist.

The wire that I use is good for a maximum reach of about 10-12 inches (25-30cm). Over that length it will flex too much, and the turnout will not throw reliably. However, there are several ways of easily overcoming that.

Once the push-rod assembly is mounted and working properly, I trim the push-rod wire to length and glue a glass bead onto the end. Then I refit the fascia. Here's how they look when it's done: 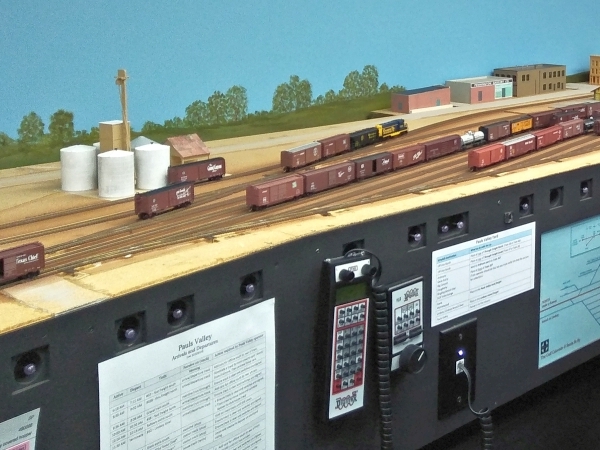 The cut-outs in the fascia allow the push-rod knobs (glass beads) to be recessed, in order to protect the push-rod from being accidently bumped.

Thanks to my friend Greg I'm now now using a slightly "improved" version of the switch assemblies, shown in the following photo: 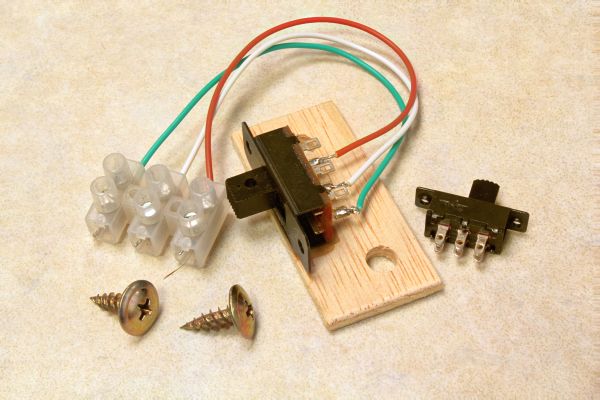 The slide switch I use is a 35mm long "miniature" DPDT switch from a local electronics store, and the knob has approx. 5mm of travel. Also shown for comparison is a "sub-miniature" 25mm DPDT slide switch which has about 3mm of travel. The small hole in the side of the switch's knob is where the piano wire is inserted, and the large hole is for the push-rod wire.

The switch is epoxied to a piece of 25mm x 55mm plywood. The mounting holes are 6mm diameter, which is larger than necessary for the screws, but allows fine adjustment of the mechanism during and after installation, simply by backing off the screws a little.

This mechanism has only 3 wires as it only needs to power the frog, with no future provision for signals.