During a full 3-hour operating session on the GC&SF we can run as many as 32 separately identified trains.  This is the timetable that we've used for ops sessions since December 2011. Click on the image to open a larger version.

Before preparing that timetable, I did a train graph to plot and plan the movements of my through trains, and where and when they will meet. Here is the first part, which shows the running of Train 37 (a southbound Fast Freight) and Train 6 (a northbound passenger train): 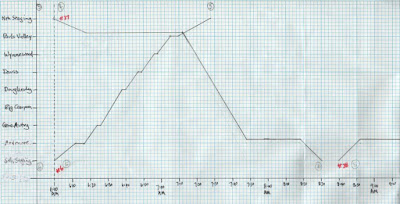 The graph shows that Trains 37 and 6 both start from staging at 6:00am. Train 37 is scheduled to arrive at Pauls Valley at 6:18am, to set-out and pick up cars.  Meanwhile, Train 6 winds its way northwards, stopping at all stations along the way.  If Train 37 completes its switching at Pauls Valley before Train 6 arrives it must still wait there until Train 6 has cleared.

The numbers in circles along the top and bottom of the lines indicate the number of occupied tracks in the respective staging yard.  For example, at the start of the session, 5 tracks in north staging are occupied. After Train 37 leaves there are 4 occupied tracks. Then Train 6 arrives, and 5 tracks are again occupied.  Each staging yard has 6 tracks and these numbers help me ensure that I don't try to fit more than 6 trains into a yard.

In addition to the 16 trains on the timetable, we also operate a number of locals which contribute a further 16 "trains" from an operations perspective:
- the Pauls Valley local is a 'turn' that runs twice daily between Pauls Valley and Davis;
- the Lindsay mixed local makes a return trip from Lindsay (staging) to Pauls Valley, and later returns to Lindsay;
- the Ringling mixed local makes a return trip from Ringling (staging) to Ardmore, and then later returns to Ringling;
- the SLSF/Frisco local runs twice daily from Hugo (staging) to Ardmore, and later returns; and
- the Ardmore local runs twice daily from south staging (representing Gainesville, Tx), to switch the quarries at Dougherty and Big Canyon. This train also switches other freight cars between Ardmore and Dougherty.

The timetable's main purpose is to set the departure times for trains operating from the staging yards. It also includes the scheduled station stop times for the six passenger trains, and 'soft' arrival times (in italics) for the through freight trains. The latter times are included to help the operators judge their speed across the layout.