Wow - it has been a long time since I last invited a crew over to run trains on the GC&SF (way back in June last year.)  But I finally got myself organised and hosted a session last Friday evening.

Things went pretty smoothly overall, with the crew completing the assigned work with very few problems. However, there were a few glitches caused by myself.

First off, when I staged the gravel train in the north-staging yard (which has video cameras monitoring the tracks) I placed the (DCC) lead loco second in the consist, facing the rear. When the driver started the train, instead of running forward and out of staging, the train went backwards and disappeared from view on the video monitor. The driver didn't notice what had happened, and consequently couldn't figure out which train he was supposed to be running, as none of the visible trains were responding to his throttle commands. Fortunately, he stopped the train and called me for assistance before anything serious happened in staging.

The second incident happened when I reached under the layout to turn on an outside light, but inadvertently switched off the room power by mistake. Then, for some unknown reason, the power would not come back on again. After a delay of about 10 minutes, and checking and resetting circuit breakers, I got the power on again and we were able to resume running trains. But the difficulty I had in getting things restarted again suggests that I have an electrical problem that needs correcting.

Apart from those two problems (which took only about twenty minutes of my time to fix), the session went so well that it was over almost before I knew it. I was watching one of the trains and realised with some surprise that it was the Livestock Extra - the second-last train on my schedule. My initial thought was that someone had run it out of sequence, but a check of the crew call-board told me otherwise. 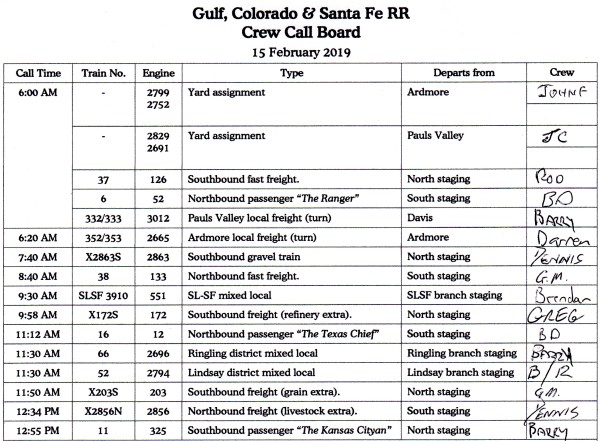 So what had I been doing? I wish I could say that I took lots of photos, but I really didn't take that many. Here's the best of what I did get ...


I had ten guest operators for this session, which is one or two more than we usually have, and most of the guys didn't spend a lot of time running trains. But judging by the amount of lively chat, I think they had a good time anyway.

That's it for this report. My thanks go to all the guys who came over on Friday. I'm hoping to host the next session in mid or late March, probably on a Tuesday.